Sibiraj and Sathyaraj combo back with Sathya team


Sibiraj, director Pradeep Krishnamoorthy and music director Simon K. King of Sathya fame are coming back with another suspense thriller in combination with actor Sathyaraj. 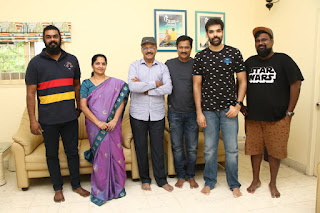 The film will be exploring a new theme and will  be produced by G. Dhananjayan and Lalitha Dhananjayan of Creative Entertainers and Distributors.

Sibiraj and Sathyaraj are coming together again after their recent combination in Jackson Durai. The music will be by Simon K. King, who got acclaim for his Kolaigaran starring Vijay Antony and Arjun. The lead heroine and a few more technicians are to be finalized.

Director and dialogue writer John Mahendran is penning the dialogues for the film.

The title of the film is yet to be decided and shall be announced soon. The film’s shoot begins in November and shall be completed in a single schedule by January 2020. The film is targeted for release in March 2020.

G. Dhananjayan of Creative Entertainers and Distributors distributed Samantha Akkineni’s Tamil version of the film ‘U Turn’ and Vijay Antony’s ‘Kolaigaran’ recently. He was also produced  Mr.Chandramouli and Kaatrun Mozhi.