I always wanted to do a period film, Sye Raa a dream come true - Chiranjeevi

- September 28, 2019
By Rinku Gupta
It was a memorable day for the film dignitaries present at the grand Sye Raa Narasimha Reddy press meet in Chennai, as its hero , the legendary megastar Chiranjeevi walked in and greeted them all warmly. ( click here to watch). After all its not everyday that Tollywood's legend attends a film event in Chennai. Those present included Lingusamy, editor Mohan, Mohan Raja, Poo Sasi, T Siva, G Dhananjayan, Vikraman and others.

The film, produced by his son, hero Ram Charan under the Konidela Productions Banner, is being released in Tamil by Super Good Films' RB Chowdhary. Written by Sai Madhav Burra, story by Parachauri Brothers,  the direction is by Surendra Reddy while Amit Trivedi has composed the music for songs while Jules Packiam has done the background score. R Rathnavelu has handled the camera.

The cast includes Nayanthara, Tanannaah ( who was present), Sudeep, Vijay Sethupathi, Jagapathi Babu. Niharika Konidela and Amitabh Bachchan ( in a cameo). The film is based on true events in the life of Sye Raa, a legendary freedom fighter in Andhra, who is touted to be the first warrior fighting for independence from the British.

Both Chiranjeevi and Ram Charan recalled thier closer association with Kollywood. Ram Charan was delighted in the way his Dhruva co-star Arvind Swami himself was very keen and offered himself to do the Tamil dubbing for Chiranjeevi. Ram Charan also revealed how big a fan he was of Vijay Sethupathi.

"I always wanted to do a period film and today that wish has come true thanks to Sye Raa, " revealed Chiranjeevi. He added that another wish, of acting with Tamannah one day, had also come true. ( click here for full speech).

Tamannaah praised the film saying, " This is a film with a pan-Indian appeal and sentiment of Independence from the British." ( click here for full speech)
The film is all set to release in several languages, including Telugu, Tamil, Malayalam, Kannada and Hindi, on October 2nd. 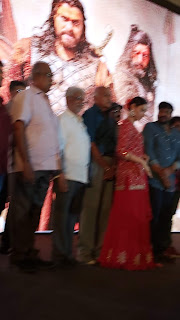 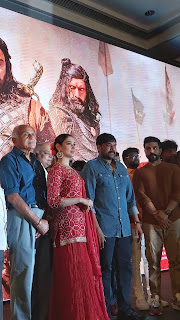 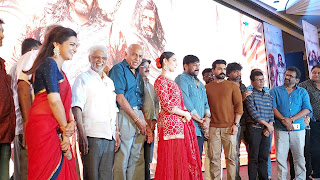