The biggest buzz after the blockbuster Bigil, is the speculation about director Atlees's next film, reportedly his Bollywood debut with none other than King Khan, aka Shahrukh Khan.
It maybe recalled that the duo met during a cricket match in Chennai creating a huge buzz about the possibility of them working together. Shahrukh even visted Atlee's office.

Now with SRK's birthday approaching on Nov 2nd, its being rumoured that the duo's next project is  titled Sanki and that producers Red Chillies Entertainment will be making the announcenent on SRK's birthday.
During a recent fan intereaction, Atlee had hinted  that he and SRK maybe working together soon. SRK's close friend, director Karan Johar had recently tweeted praising Atlee, Vijay and Bigil as well. 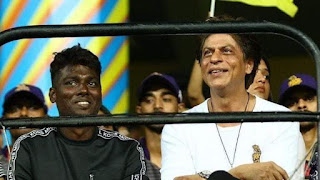