Saturday evening has been a day of many revelations by director Gautham Menon.

Apart from announcing the release date of Enai Noki Paayum Thota and throwing light on his film Joshua: Imai Pol Kaakha, Gautham gave an added announcement about his Chiyaan Vikram project as well.
Dhruva Natchathiram which had created a huge buzz with its trailer and look, is among the most awaited films of the year.  Now looks like a release is finally in sight after the several issues the director had been caught up in of late. 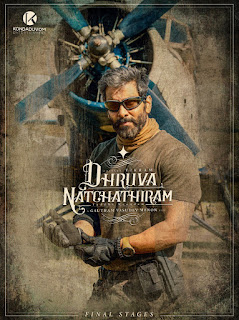 Gautham has tweeted,"And The Season doesn't end without this film that's really close to my heart & is hopefully state of the art. Tremendous& positive experience working with THE Chiyaan Vikram!
#DN in post production over the next 60 days
and heading towards release.
#Johnwillmeetyousoon "

Fans are no doubt over the moon!
chiyaan Vikram dhruva Natchathiram Gautham Menon