Lipi Cine Crafts 50 : 50 is the next film of actor Sethu along with Yogi Babu, motta Rajendran and John Vijay. Dharan has composed the music for which John Vijay has sung a song. Abhinaya Sri has done the choreography. The film is directed by Krishna Sai. 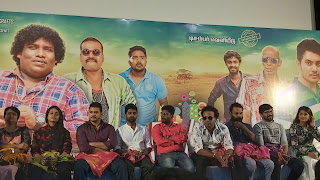 Sridhar master revealed he is acting in his own direction Chavadi by the same producer. " The film is about bike racing. Real life road racers have acted in the film," said Sridhar master.

Sun TV Pavitra has acted in the film. Said she, " It's a full time family entertainer. This idea my first movie and the director has guided me fully. I share screen space with Sethu and Bala Saravanan a lot. It will be a laugh riot I guarantee. Shruti and Srinika are also the heroines who are all in love with the hero. Who gets the hero is the story " 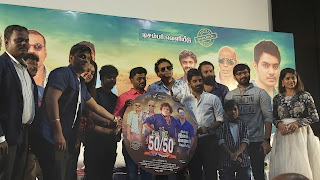 Hero Sethu said, " I studie medicine but acting was my passion always. In both professions one meets lots of people. But making films is a tough profession. It's not easy to make a film studio successful, as many lives depend on it. Dharan's music is fantastic and Inam a big fan of his. I have tried my best to dance and I thank Abhinaya sri for the effort she took as a choreography."

Director Krishna Sai revealed, "The film was a joyride with so many  comedians, Bala Saravanan, Rajendran, Yogi Babu, John Vijay and others".