Producer G Dhananjayan has put together a new initiative, touted to be  India’s first ever film consultancy firm.

Called CEAD Film Consultancy, it was launched today by actors Arya and Vijay Antony, in a bid  to provide a fully integrated and comprehensive film consultancy service from experts in the field, covering all aspects of film business. 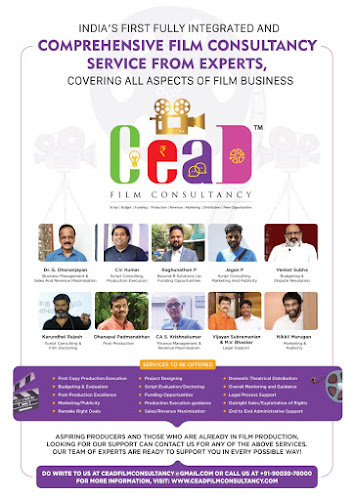 What is really the issue and why is the failure rate is so high especially from new comers? The new entrants, who are failing in large numbers are led more by passion and glamour than reason, logic and purpose and lack clear knowledge on what works with the audience and film trade and what does not. Out of the 150 odd films which failed to succeed in gathering revenues,  many lagged in the right screenplay, cast and crew, commercial packaging, making and understanding of  film economics.

Can the number failure rate  in the industry be reduced and success rate increased, with the proper guidance?  According to the founding team, CEAD Film Consultancy was formed with the aim of saving the glamour -seeking, passionate producers and filmmakers from any impending failure, by guiding them to take  measures that could help them avoid failure.

Commenting on the launch of CEAD Film Consultancy, its Founder and Chief Mentor, Dr.G. Dhananjayan stated, “Post-Covid-19, Tamil Cinema will not be the same as the past. The Film industry is going to offer several challenges and opportunities to film Producers and filmmakers. CEAD Film Consultancy shall be on the forefront to guide them, to tap these opportunities and tackle the challenges.Our film consultancy shall cover every aspect of film business: From development of script to production to distribution to sales, marketing, distribution and even providing help in securing funding."

A much needed shot in the arm to a flailing industry indeed.