Vignesh Shivan and Nayanthara of Rowdy Pictures have  much-awaited movies  including the award-winning Koozhangal and raw-n-hard-hitting ‘Rocky’  all set for release shortly. Now the  production house has launched its new project titled Oor Kuruvi. While Koozhangal is a melodrama and Rocky is a crime-thriller, Rowdy Pictures is all set to surprise with a full-length comedy-drama. Kavin, who has established himself as a  performer  in his recent release Lify is playing the lead role.  The movie is directed by debutant Arun, who worked as an assistant director to filmmakers Vignesh Shivan in Thaana Serndha Koottam and Ajay Gnanamuthu in the movies Demonte Colony and Imaikka Nodigal. 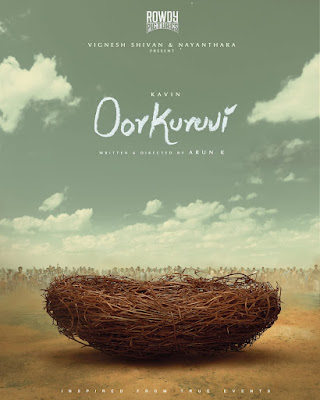 Producer Vignesh Shivan says, “Arun worked as my assistant in the movie Thaana Serndha Koottam. His ideas and clarity have always fascinated me, and Rowdy Pictures is delighted to produce his directorial debut OORKURUVI. We are holding talks with leading actors and technicians right now and will make an official announcement shortly. The entire movie will be shot across the exquisite locations of Southern Tamil Nadu. Rowdy Pictures always believes in creating and presenting unique content, and OORKURUVI will be a delightful experience for audiences.”