Samantha on eve of Yashoda release,' I'm taking it one day at a time' 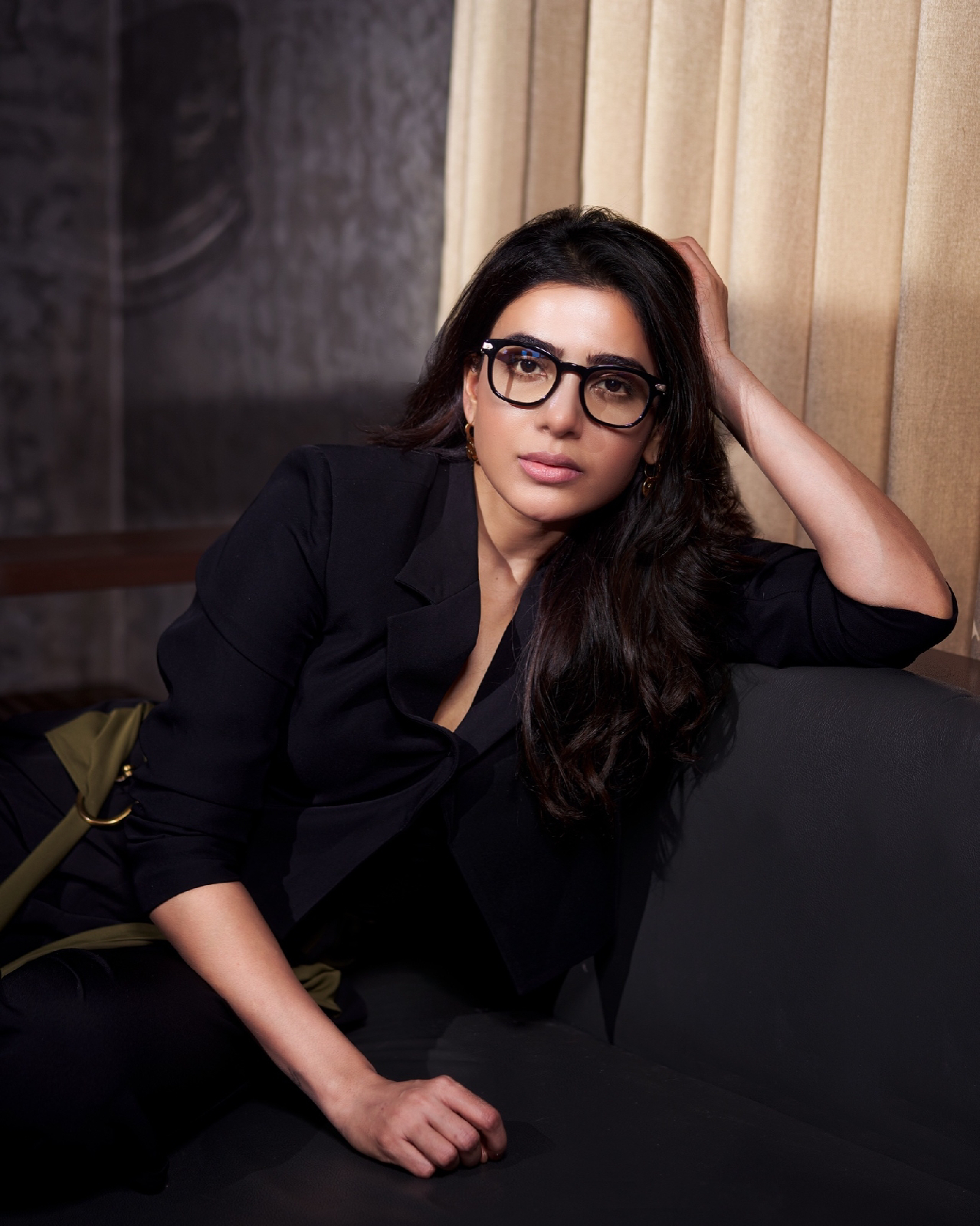 Breaking the silence after revealing about her illness, Samantha interacts with medja and gives interesting insights about the movie and herself… 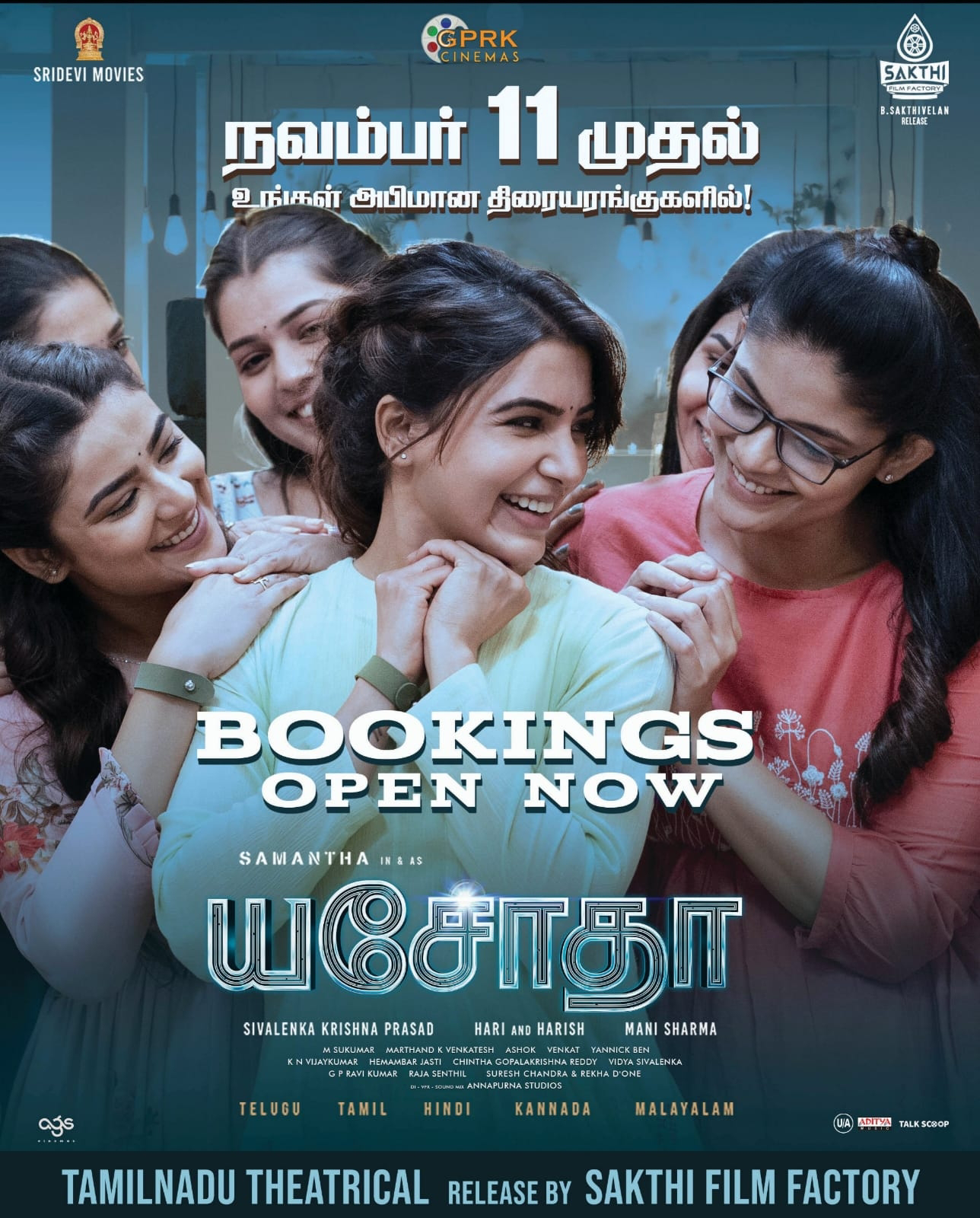 Hello Samantha! How is ur health now?
Thank you for asking. I am on the path to recovering. Hopefully things will be better soon. At the moment, I am taking it one day at a time. And today, I am excited about the release of Yashoda.

How do you feel about the amazing response for the teaser and trailer of Yashoda?

I am excited. Maybe there is a little bit of nervousness also. But what we put out there as trailers and teasers are the true and authentic glimpse into the movie. And that has been received so well, I am positive that the audience will love the movie as well.

What was your first reaction when you heard Yashoda? Was it an immediate “Yes” or you took time to think about it?

Yashoda was one of those stories and character that I almost immediately wanted to do. I usually take a day to okay any script but Yashoda was one script I okayed immediately as the story is just so powerful, and there wasn’t so much overthinking on this one. It gave me chills, goosebumps, you know. And I could see how that’s what this movie has the power to do to the audiences as well. The directors Hari and harish have really brought out a very new concept. 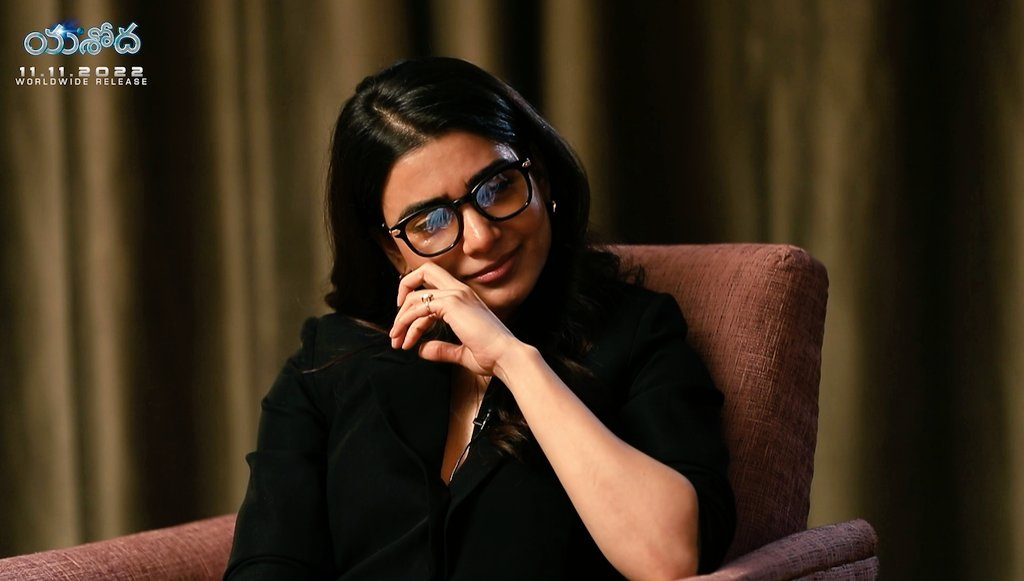 How different is modern Yashoda (the one you play in the film) from the ones in our puranas?

Let’s say that they are both mothers and women, who inadvertently become saviour of many.You all know the story of Yashoda, who raises Lord Krishna; after watching the movie, you will understand this  character Yashoda and hopefully agree with what I am saying..        Surrogacy has come to fore in the recent times. What is your opinion on surrogacy?

I really don’t have a strong opinion on surrogacy. I understand it as a solution, or even hope, for many people who want to be parents. And that’s what it is for me. 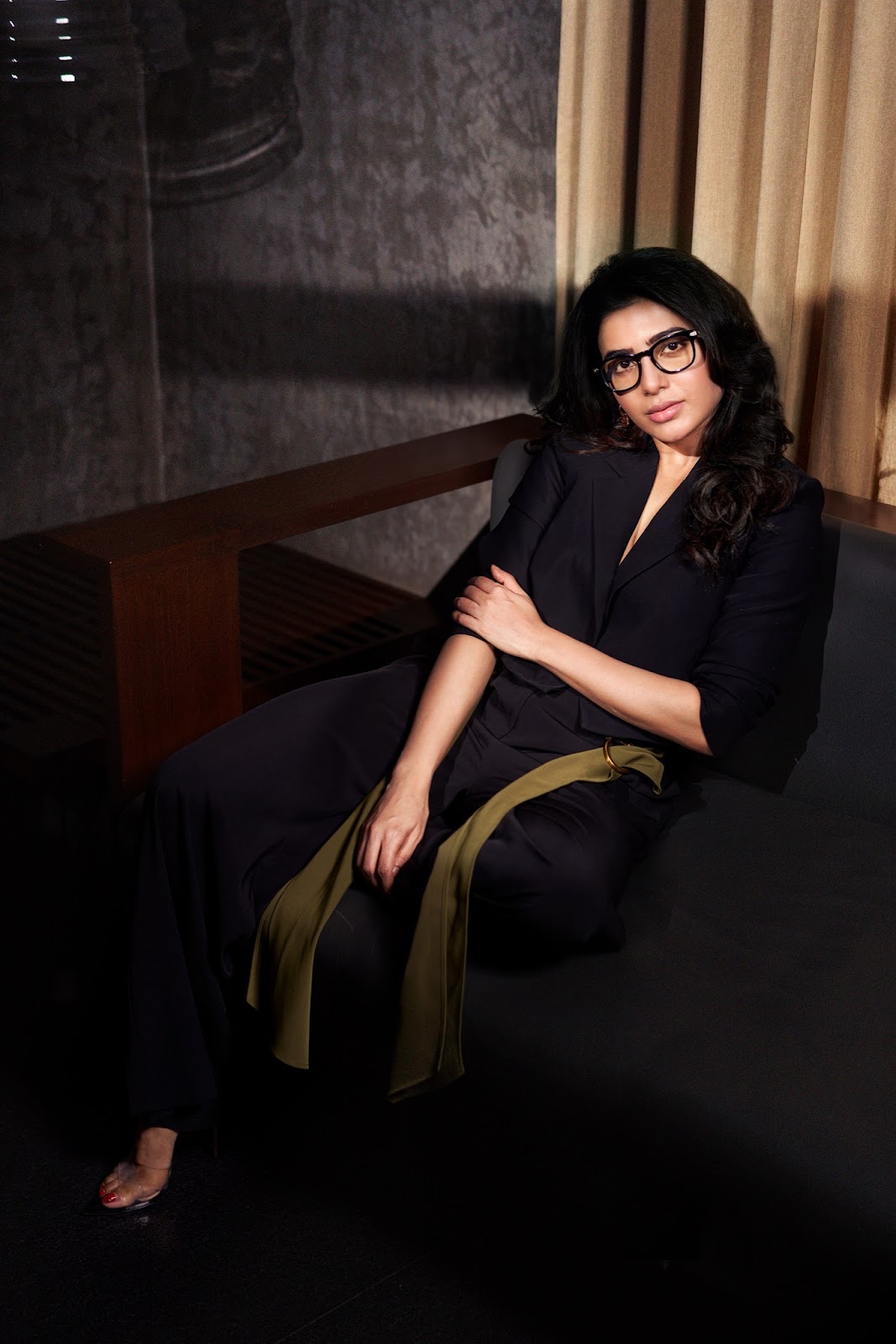 The trailer not only touches upon surrogacy, but also drops hints on surrogacy, crime and something to do with rich women. Can you tell us anything more about the movie?

If I reveal anything else, I will be ruining the movie viewing experience. Let’s just say it’s a thriller… a damn good one… And all of the technicians have put in their art to ensure it’s an edge-of-the-seat watch. From the way the directors have written and executed the screenplay, the fights, the art/set and the music - you should really go watch it and enjoy it on the big screen.

You have worked in different genres. How excited were you to have an action thriller this time?

When I am listening to stories or on the look out for my next character, I ensure that I am getting into something different every time. And the closest I have done to Yashoda before may be U-Turn, which is also a thriller. But Yashoda - I assure you - is a completely new ballgame. And in terms of action, I have come to enjoy action really. Raji in Family Man was the first time I did action. And to be honest, doing action is quite exhilarating.

Was there any special training you took for action scenes in Yashoda. Though you have done action before it was not so intense before right?

So, I and action director/stunt Yannick Ben worked together first on Family Man. So I did train in Boxing and kickboxing while prepping for that role. Having said that, performing any action requires a lot of practice and rehearsals. Also, in Yashoda, I was playing a pregnant character and she is a simple girl. So the action was designed to suit that specific character. Both Yannick and Venkat ensured that the fights were raw and real, but tailored it to suit the character. And so I had to get into that role while doing action as well. So yea, a lot of prep. 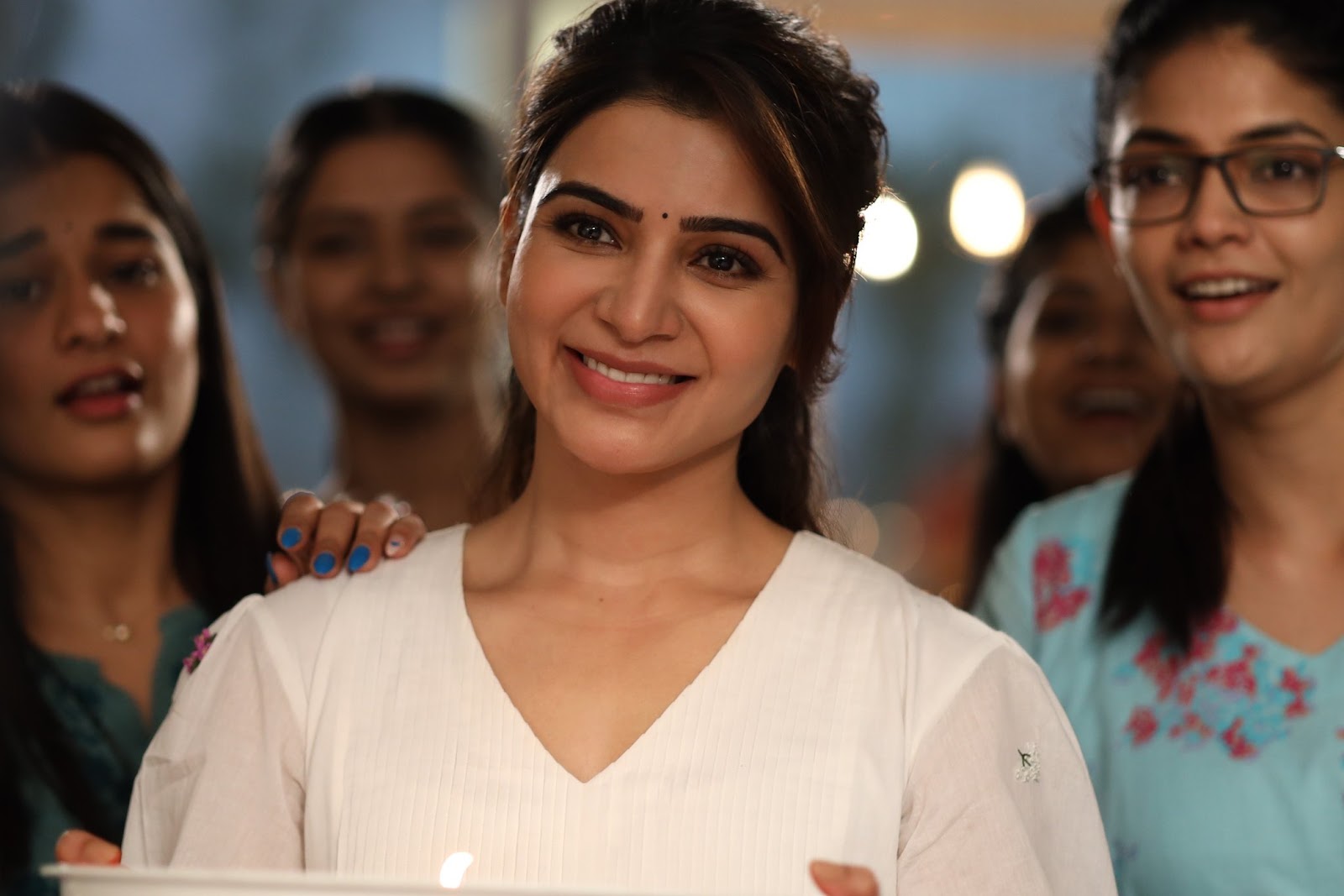 Varalakshmi Sarathkumar, Unni Mukundan, Rao Ramesh, Murali Sharma, Sampath Raj - the movie has fully packed cast. How was it to work with all of them? You know a couple of them from before, right?
It was wonderful to be working with all these actors. It is nice to be around such experienced people as we get to learn from them. Like each language actor has some small quirks that are interesting to pick up from. The way a Malayalam actor delivers his dialogue is different from the way a Telugu actor would. So working with such an ensemble cast was very interesting as I learnt so much too.

Looking at the trailer we get to know there are some brilliant visuals, the production values look rich as well. Would you say that the producer Krishna Prasad garu went all out to ensure that the movie got the best of everything?
Definitely. For the facility you see in the film, they considered a lot of local hotels and hospitals but as nothing seemed fit, they constructed a huge set. The producer ensured that the movie looked great and that the final output would be grand.

Was the story pitched as a pan India project from the beginning or was it a decision that came about as the project progressed?

See, the story - for what it is - is a story of great emotion as well as a movie that is sure to keep the audiences engaging. And that potential we all could see from the beginning. But as the movie took shape, we became more and more confident that it will work across the languages because of the movie’s emotional core. And so it became what it is today - a five language movie. But “pan-Indian” is what audience and media is calling it. And fingers crossed, it will be a “pan Indian” hit too.

Have you been keeping track of the responses of audiences from Tamil, Malayalam, Kannada and Hindi?

Yes! And to be honest, I have been overwhelmed by the responses across the board. There are obviously differences in micro trends or what people like in different languages, based on their tastes and viewing patterns - which is alsoquite interesting to see.

I really do have to thank all my colleagues from across the industry, who helped push the trailer as well -  Vijay Devarakonda, Dulquar, Rakshit Shetty, and Varun.  That meant a lot, you know, to have that kind of support. This helped a lot too to create that extra push across languages.

You have dubbed for the film with what seems like an IV drip. What made you do this, while there was always an option to get it dubbed by someone else?

I had made up my mind to dub for this movie. And once I had committed to that, I had to see it through. I feel when an actor puts their heart into a character, they would want to be the voice for it too. I am stubborn like that. But I am glad that I was able to do it, despite it being challenging.

Which is the other character in Yashoda apart from you that you liked the most?

I would have to say Varu’s. That character has such an amazing arc. If I say anything more, it would be a spoiler. But, you will understand why once you have seen the movie.

What do you want your fans to know about your health condition?

Thank you all for the support, love and prayers you have been showering on me. I am on the path to recovery. It’s a battle. But it’s a battle that you all are making worth fighting for.