- November 21, 2022
Prince Pictures Producer S Lakshman Kumar’s upcoming movie ‘Kaari’ starring Sasikumar in the lead character is scheduled for the worldwide theatrical release on November 25, 2022. Malayalam actress Parvathy Arun is playing the female lead role in this movie, which marks her debut in Kollywood. Debut filmmaker Hemanth is directing this movie, which has musical score by D Imman. 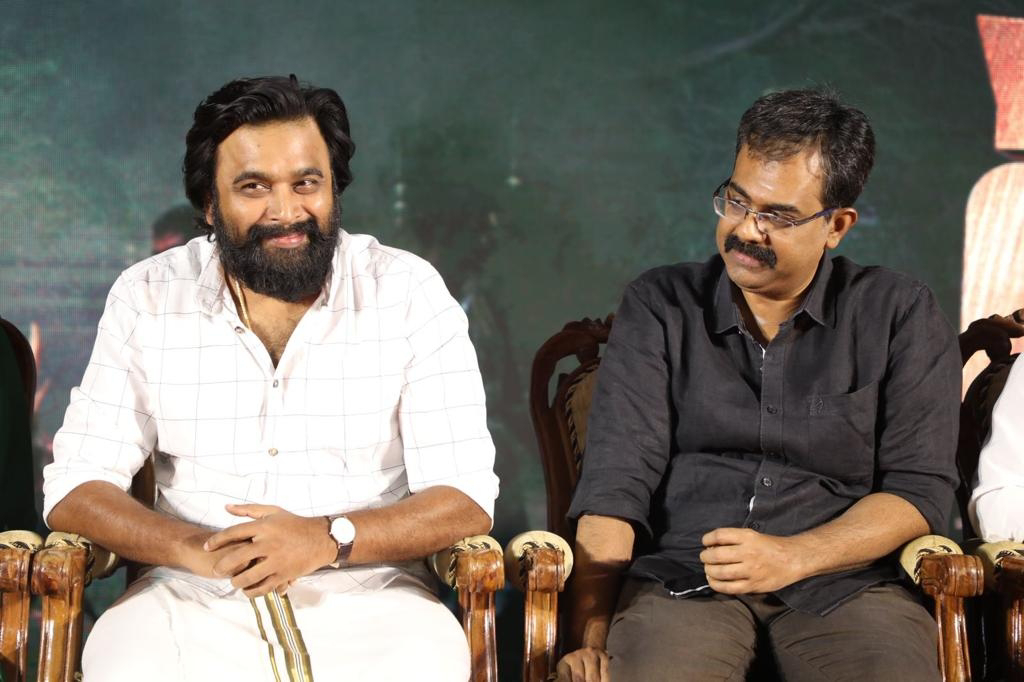 Bollywood actor JD Chakravarthy is playing the negative role in this movie. The others in the star-cast includes Aadukalam Naren, Naagi Needu, Redin Kingsley, Ammu Abhirami, Prem and many more prominent actors are a part of this star cast. With the film hitting screens this Friday (November 25, 2022), the entire cast and crew were present for the Pre-Release event. 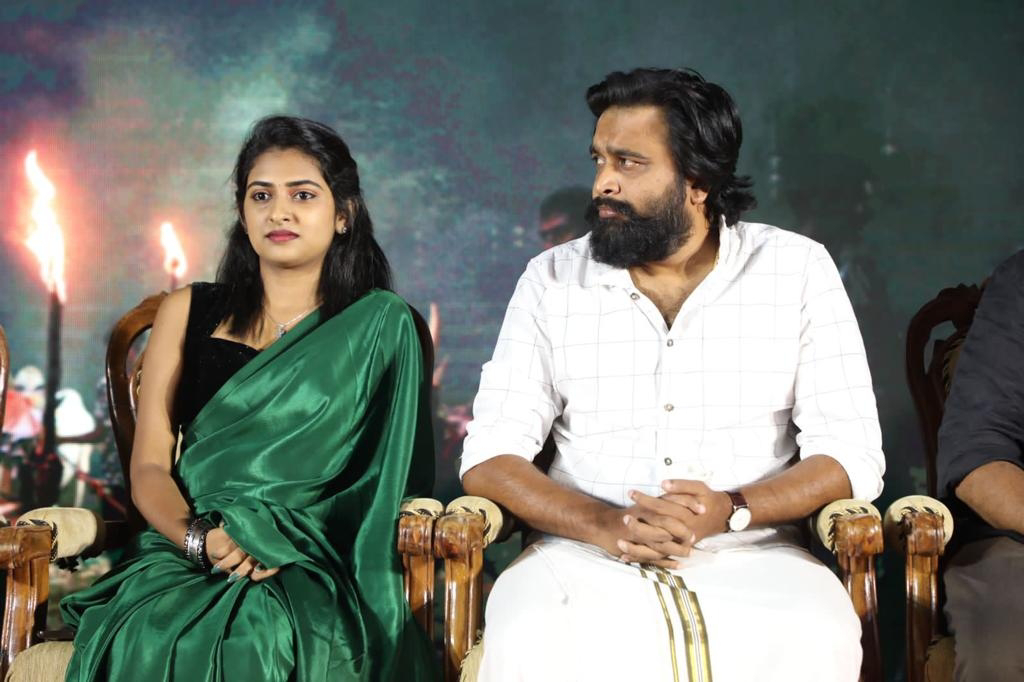 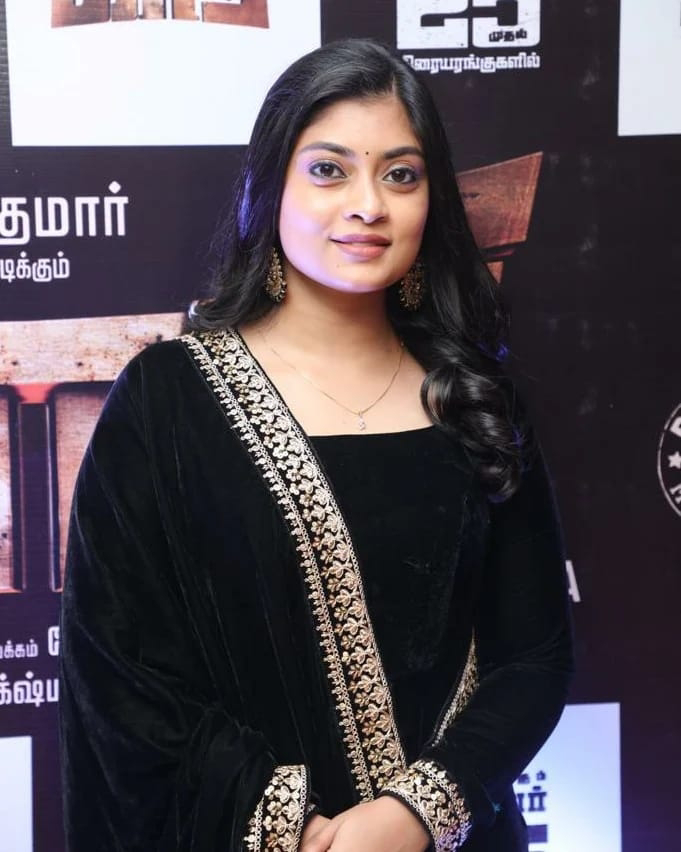 “Director Hemanth narrated this script of Kaari to me, when there was an interim ban of Jallikattu. I was intrigued by the impressive narration and the elements that it owned, which propelled me to materialize it by all means. It was more exhilarating to see that the united power of Youth paved way for the justice, which furthermore instilled in me the urge to produce this movie. I strongly felt that Sasikumar sir would befittingly look perfect for this character. We have shot film amidst heavy challenges including the filming of scenes with bulls and horses. Besides, the scenes involving horses were shot with the ones involved in races in Mysore. Recently, we are facing some upheavals, and this movie will brim us with more hopes and confidence.” 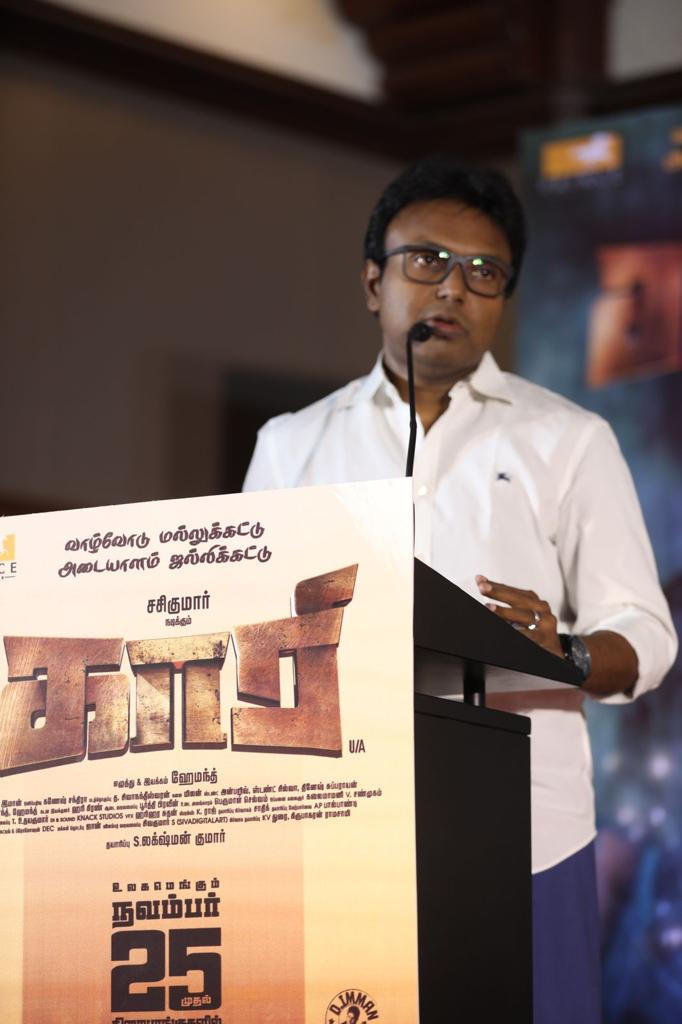 Actor Prem said, “When I was told about my character, I was initially hesitant to perform it. However, I wanted to give a try and decided to go with it. Riding race horses isn’t an easy deal. It was really challenging to shoot the scenes with race horses in Mysore.” 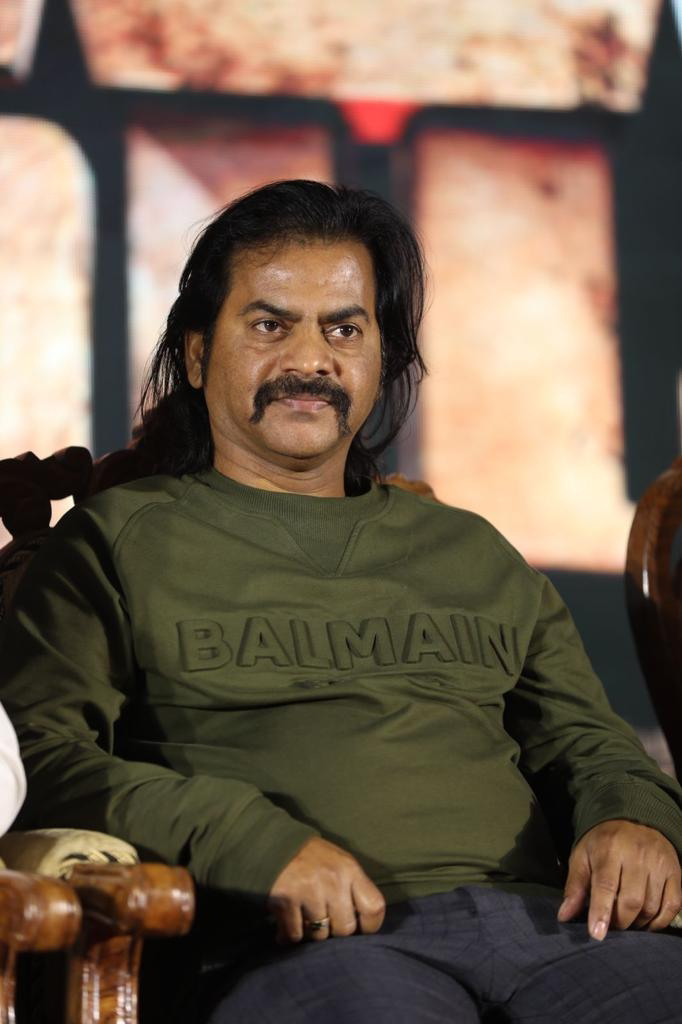 Cinematographer Ganesh Chandra said, “Producer S Lakshman Kumar wanted to deliver the final output with the right package, and hence, he kept providing us with essential requirements that we kept asking him. I am seeing Hemanth as the next one to director Vasantha Balan to narrate the films visually. D Imman has given more life to the movie with his background score. Actress Parvathi Arun has delivered fabulous performance, especially during the pre-interval scene. The real participants in the Jallikattu sports helped us a lot in filming the movie in perfect terms.”

Editor Sivanandeeswaran said: “After Theeran Adhigaaram Ondru, I am very impressed with the film Kaari. A film’s major success is contributed by the interval and climax point, which was evident with this movie. Sometimes, the reality becomes more powerful when uttered by apt actors, and Sasikumar owns that charisma and stature. Kaari will not disappoint anyone in the theaters.” 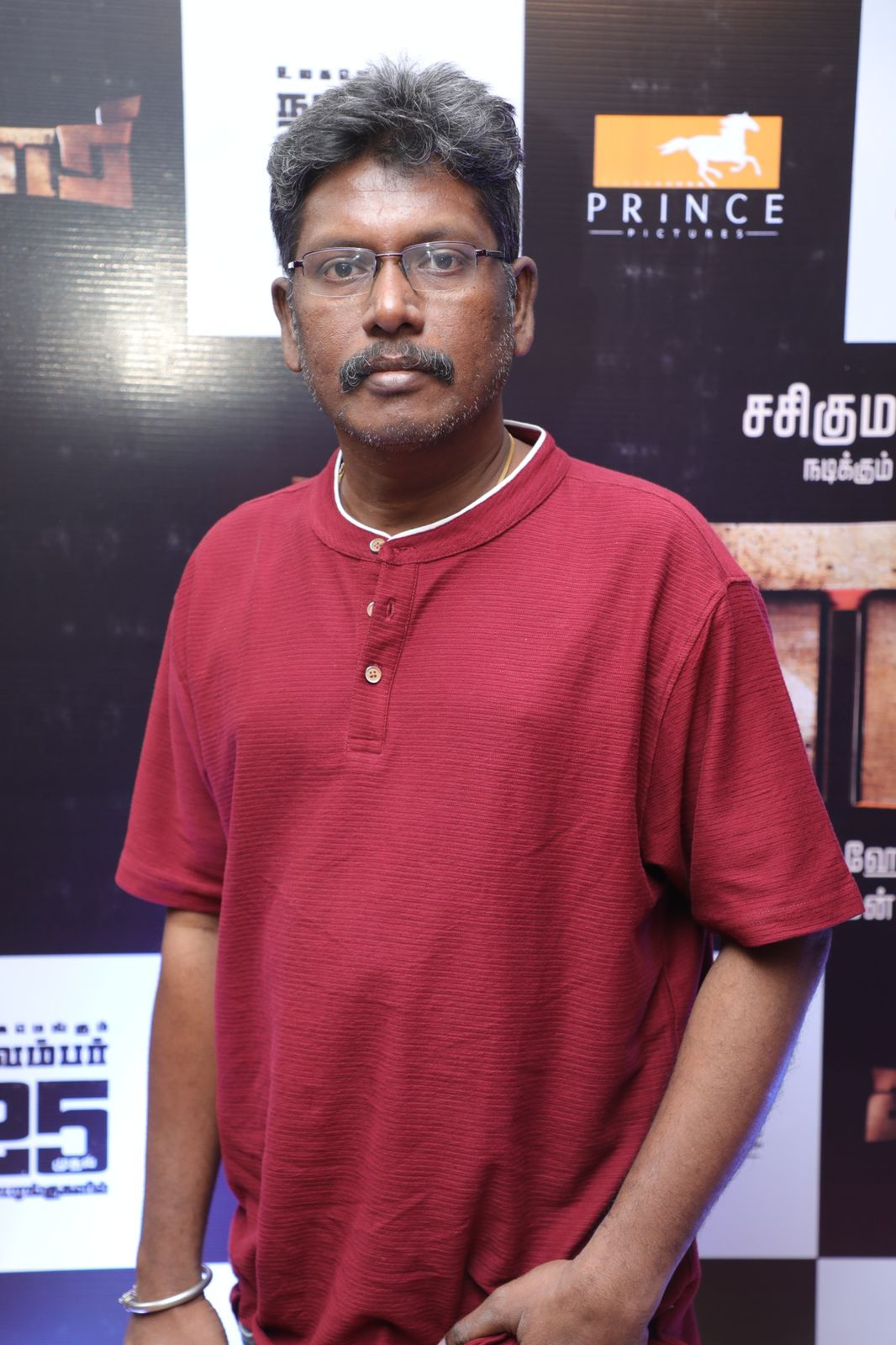 Actor Nagineedu said, “The film’s shooting was done consistently day and night. I had a habit of eating at the right time. Actor Sasikumar understanding this situation, kept supporting me. I would say ‘Redin Kingsley’ is an atom bomb. The main reason is that when we are seriously conversing, he would throw up throw up an uncalled-for statement. Later, when I asked the crewmembers, I got to know that this is USP, which has worked wonders in many movies.”

Actress Ammu Abhirami said, “It’s not just Sasikumar sir movies, but he himself is so simple and natural in all ways. I feel excited to be a part of this movie. Kaari will be a delightful entertainer for everyone in the theaters.” 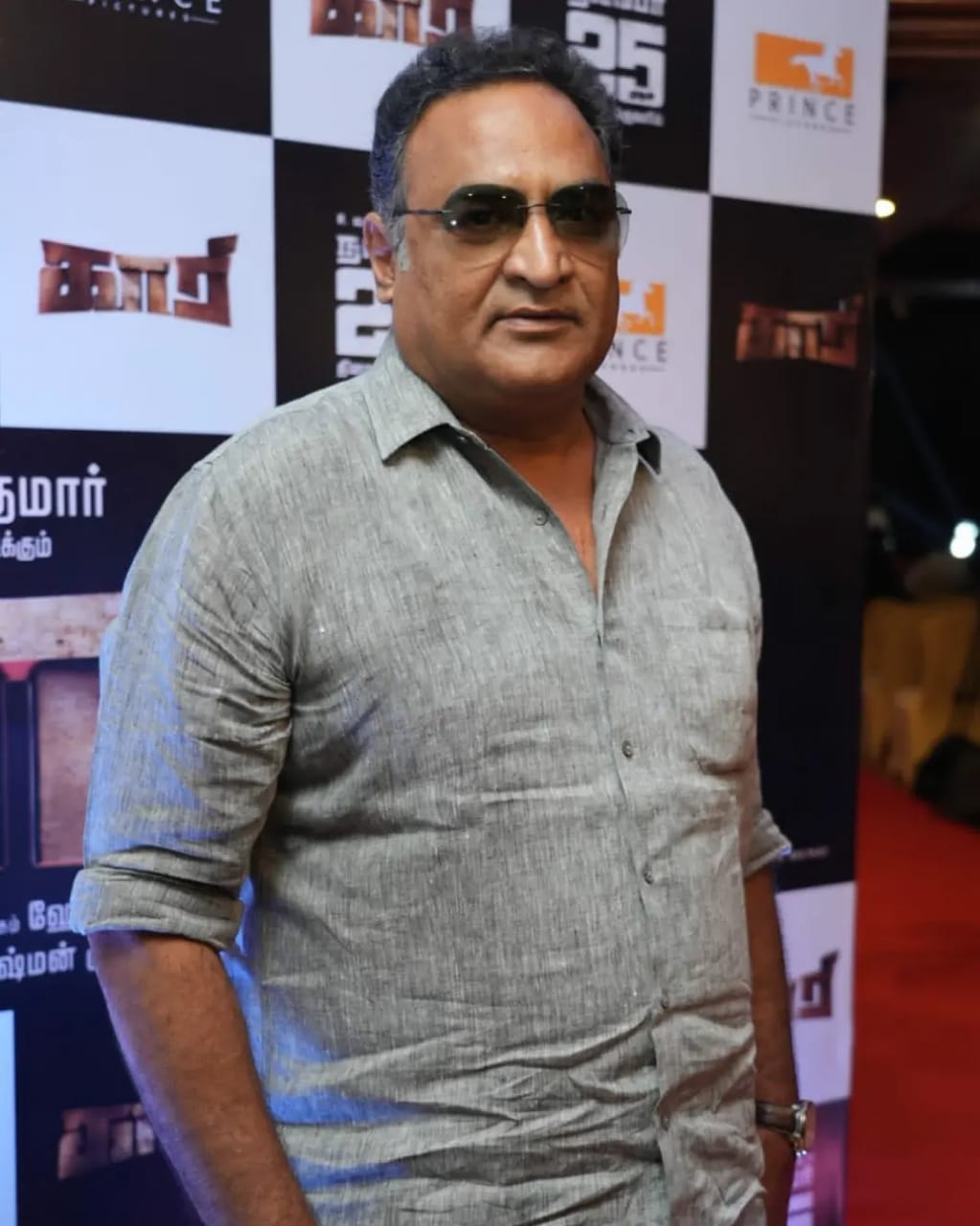 Aadukalam Naren said, “I am sharing the screen with Sasikumar after Sundarapandian. Usually, I don’t listen to the entire script from any filmmaker, but Hemanth made sure that I get to know about the complete story. He narrated the script for 3 hours as he wanted to make sure that every actor in the movie should know about the film’s plot and play.” 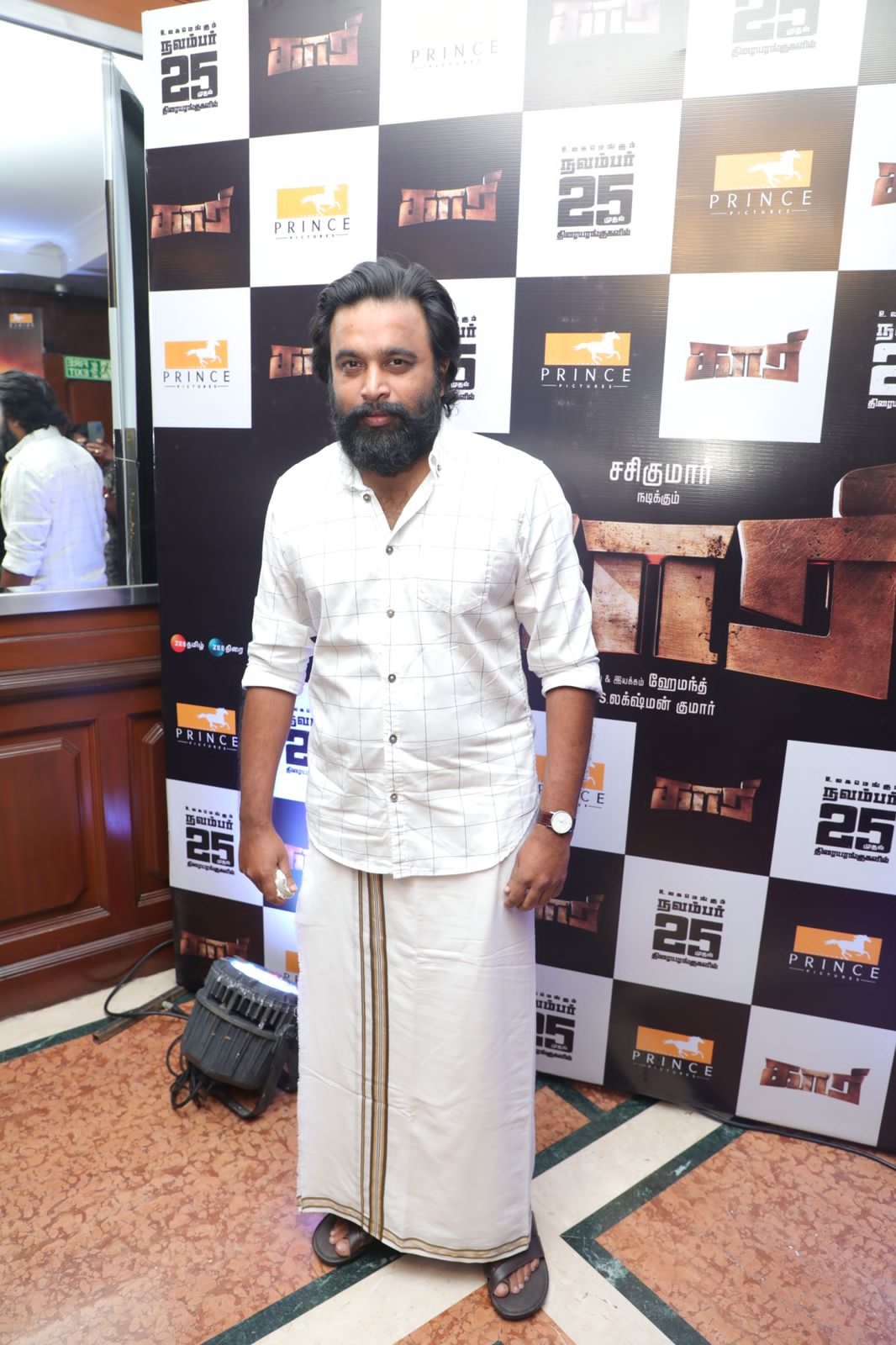 Actor Redin Kingsley said,“I don’t know to ride bike itself, but the team made me ride an auto rickshaw. It was really challenging to perform those scenes of driving it with Sasikumar and Parvathy sitting behind me. Kaari will be a big blockbuster hit like Love Today.”
Actress Parvathy Arun said, “Initially, I was nervous to work with Sasikumar sir, but he made me feel comfortable throughout the shooting. When director Hemanth asked me if I like bulls, I gave a nod and then I had more scenes to shoot with it. Like everyone said, there was a crucial scene with the creature during the interval point, and it has shaped up really well.”
Music Director D Imman said, “I am now stepping into 20th year of musical journey in the industry. Director Hemanth narrated the script for three hours. He materialized the entire movie exactly as he narrated me. The song ‘Saanjikkava’ has turned out to be a good hit. The song is written by late lyricist Lalith Anand. Actor Sasikumar sir is looking more handsome and charismatic in this movie after many movies.”
Director Hemanth said, “Producer Lakshman sir is a man of action and Sasikumar is a man of few words. When I narrated the script, he told that it will be good if I can materialize the script exactly as I narrated. The word ‘Local’ has become an offensive term, which is untrue. Local means nativity. The more, we are inclined to nativity, the more we have reputation. In the recent times, we are coming across many elements that is trying to hamper and curtail it down. One among them is Jallikattu, where we came across many incidents that were purely done to put an end to our culture and identity. Whatever might be the situation, none can impose an end to this sports of our culture.
Across the entire India, the youngsters in Tamil Nadu alone are inclined to the cultural esthetics including the sports like Jallikattu. Few groups and organizations are attempting to bring an end to this, thereby diverting the attention of youngsters into a different arena. The film ‘Kaari’ will speak about the human emotions, hope and beautiful relationships. On the whole, the entire movie will be an emotional action drama that will savour the tastes of all audiences.”
Actor Sasikumar said, “There are lots of criticisms about my consistent projects on rural based movies. I would like to clarify that I come from rural backdrops. I have lived my life there. This is my identity, my culture and nativity. If I am successful today in what I am doing, it’s because of the village that has nurtured me. So it’s my duty to give back something and I will continue to act in more rural movies irrespective of the criticisms. Producer S Lakshman Kumar has fulfilled my desire that I had as a producer. He made sure that everyone in the crew had good food, and it was maintained throughout the shooting. I was deeply inspired by the gesture of Captain Vijayakanth sir and Producer Ibrahim Rawther. I couldn’t continue my production venture, but am happy to see that Lakshman sir continues to do this wholeheartedly.  Ammu Abhirami has done a beautiful role I this movie. She has to continue doing such roles in the near future. Tamil cinema is desperately in need of character artistes, and she has to take up such roles that will escalate her stature.
The film’s villain role is played by actor JD Chakravarthy, who has been extremely supportive and caring for me. He would also ensure that I am safety. He is a versatile actor.
This is the 9th movie that I am working with a debut filmmaker. The reason why I didn’t openly appreciate Hemanth for this movie is because I wanted the audiences to do it. The success of this film shouldn’t be marked by producer Lakshman gifting him a car, but sign him up for his next project with actor Karthi in the lead character.
There were many real Jallikattu players, who were so supportive and helpful throughout the shooting. Even then, there were few occasions, where the Jallikattu bulls would almost attack me, and I have had narrow escapes. I had promised them that I would watch the First Day First Show along with them, and will keep up the word without fail.
How much ever legal suits come up, no one can ban Jallikattu. We have never tortured any Jallikattu bulls. The organizations that are trying to ban the Jallikattu game have a hidden agenda behind it. We have delineated 18 varieties of cows in this movie. Kaari is the first-ever big budgeted movie in my career.
Kaari is a movie for audiences from all walks of life. It’s a film about Jallikattu. Everyone should watch this movie in the theaters. I will officially announce my next directorial venture during the success meet of this movie.”
kaari Sasikumar