Why is Vishal hand-cuffed in new pic?

Recently , a pic of Vishal in  hand-cuffs  created a huge buzz as it was thought to be of a rumoured arrest.


Actor Vishal is usually the cynosure of all  eyes making headlines for his projects and other activities involving the Nadigar Sangam and Tamil Film Producers Council. So much so even a picture fromhis shooting spots have sparked off sensational stories asit happened during the shooting of Irumbu Thirai . A shooting spot video of an income tax raid sparked a buzz and later humour. 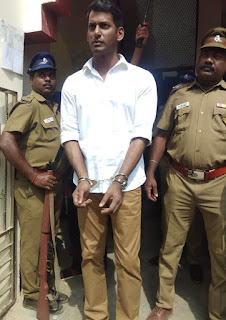 Now it seems history  is being repeated with a new picture of Vishal being hand -cuffed dling the rounds. Many have been asking  if the actor has been arrested. The topic turned viral for a few  hours until the clarification was made that its nothing but a click from the shooting spot of his upcoming film Ayogya!


The film is directed by Venkat Mohan, a former associate of filmmaker AR Murugadoss. Raashi Khanna is playing the female lead role in this film, which has an ensemble star-cast which  includes Parthiepan, KS Ravikumar, Sachu, Vamsi and many more familiar actors.


While Sam CS is composing music for this film, VI Karthik is handling cinematography and Ruben is on editing. SS Murthi (Art), Ram-Laxman (Stunts), Brindha-Shobi (Choreography), Uthara Menon (Costumes), Yugabharathi-Vivek (Lyrics), Vakkantham Vamsi (Base Story) are the others in the technical team.

Ayogya is produced by B Madhu for Light House Movie Makers and the shooting is proceeding st brisk pace towards completion. 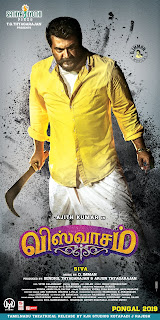