- February 21, 2019
Offer him any roles and he will stand out to be an exceptional performer. While being heroes, heroines, comedians or villains might be regarded as the prime league attention seekers; there are exceptional actors who instantly steal the show even with their minimal screen prominence. Actor Bose Venkat has become an integral part of every family for his long span of journey in media diversified into Small and Silver screens. 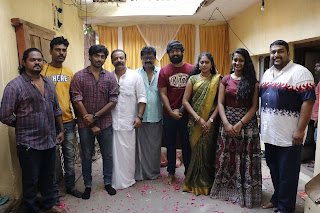 With such proficient qualities as a performer, he is always known for his sound knowledge about technical and narrative aspects of filmmaking too. Acquiring such skills, it’s time for Bose Venkat to embark on his directorial venture with tentatively titled “Production No.3” of producer Hasheer’s Rooby Films.

“It’s been a long run dream for and it’s finally happening,” says Bose Venkat, whose maiden debut will be a commercial entertainer. Adding more about his new journey, the actor jokingly says, “Every time while working with different filmmakers, I would stealthily try to find out their working style and grab them. Jokes apart, I must thank my family, industry friends in both small screen and silver screen for motivating me to exhibit my potentials in filmmaking. More than all,  I thank producer Hasheer of Rooby Films for not just banking trust on my script, but bankrolling it as a complete support. “

Being a part of movies based on several genres and he playing different roles from one film to another, it gradually creates curiosity on knowing what this film is all about. Bose Venkat says, “It’s a full length commercial entertainer that I believe will cater to the tastes of universal audiences.”