The team of Dhillukku Dhuddu 2 including director Rambala, actor Santhanam and cinematographer Deepak Kumar Pathy were present to interact with media and press as the film is getting ready for release on February 7. 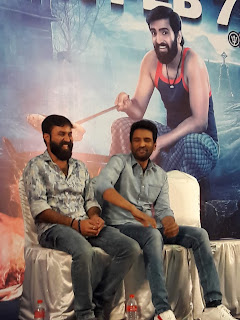 Cinematographer Deepak Kumar Pathy said, “This is the third time I am working with Ram Bala sir and he is really talented for he is clear about what he wants. This helped me a lot in getting perfect output for what he wanted.”


Director Ram Bala said, “I am there in the industry for a very long time and it was during that time Santhanam gave me an opportunity to make a film and that’s how Dhillukku Dhuddu happened. The film turned to be a decorous hit and successfully completed 75 days, which was an organic hit. Soon after the film’s success, we decided to come together for one more film. I am happy that the film has come out very well.”


Actor Santhanam said, “I am happy to meet you all after a long time. Both myself and Rambala sir worked together in the film Dhillukku Dhuddu. We had personally experienced a wonderful scenario in theatres where everyone had enjoyed the last 20mins of the film, which had lots of slapstick comedy episodes. So when we decided to make Dhillukku Dhuddu 2, we were keen on making full length film with slapstick moments. I must thank Dipak Kumar Pathy for capturing the film with top notch quality. Shooting a horror film isn’t  easy  and he had strived a lot over nurturing this film with outstanding visuals. Music director Shabir has given fantastic songs for this film and his Sagaa is getting good redception for the songs. Shraddha Shivdas has exerted an impeccable performance in the film. I am thankful to Trident Arts R Ravindran for making the release process smoother. These days, it has become a tough challenge to release a film and with his support, the film is getting ready for release on February 7.” 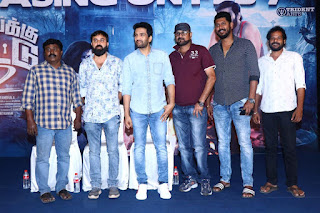 Santhanam thanked his fans who have been supportive in his journey. “I don’t know how many fans I have, but they have always been supportive to me at the hardest times, especially during the phase of past one year, where they have been patiently waiting for this film’s release. I have always wanted to proceed ahead in a journey and that’s what propelled me to become a hero from the stage of comedian and even now my aspirations to become filmmaker are based on these supports. I hear some of my fans tell that I am a great inspiration to them and I want to keep it going.”