July Kaatril is a love story from 3 perspectives

- March 05, 2019
by Rinku Gupta
The audio launch of July Kaatril was held in the presence of actor Karthi and director KS Ravikumar recently.
The proceedings turned out to be eventful as anchor, actor Kasturi tried to provoke Karthi referring to his father Sivakumar's selfie controversy. But Karthi managed to avoid any controversy and preferred to focus on the film. The director KC Sundaram and his family are his old family friends from decades it was revealed. 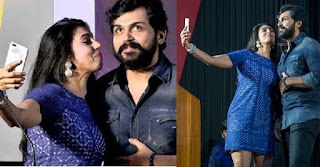 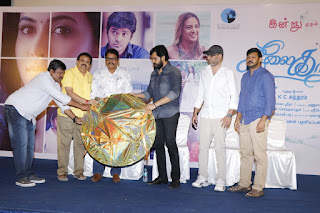 The director revealed that the film has been shot from the 3 perspectives of hero Anant Nag and the 2 heroines Anju Kurien and Samyukta Menon. ' Usually thrillers are shot like this but this is the first time a love story has been shot grom 3 perspectives, ' he said. The music is by Joshua Sridhar.  ' The heroines are busy in shoot in Kerala so they couldn't come. Hero Anant Nag is not well so he couldnt make it. I am very grateful that my friend Karthi has come to support my film despite night shooting, ' he added, referring to the absence of the lead cast for the function.