Oru Kathai Sollatuma directed by Prasad Prabhakar and produced by Rajeev Panakkal,  is the story of how Oscar winner sound designer Resul Pookutty managed to fulfil not only his own dream but also that of thousands of others in recoding the magnificent sounds of the Thrissur Pooram temple festival of Kerala. 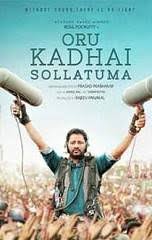 The simple  story directed by Prasad, has been partly fictionalised for dramatic purposes. Suffice it to say that in the midst of his busy schedules, Pookutty was induced to take up the project of recording the detailed multi- layered sounds  of the world famous festival. In the process several impediments came his way. Who caused them and why? How did he overcome  them?

Pookutty plays  himself and does pretty well in front  of the camera.
The film may feel like a docu drama in places, and some of the drama contrived,  but overriding the glitches, it overall showcases a grand spectacle, a  victorious feat for a noble cause and highlights the age old traditions of our ancient civilisation.
resul pookutty