The shooting schedules of Hansika starrer ‘Maha’ is in full swing as planned.

Currently, the entire team is shooting across the sun baked coastal paradise of Goa. Social media is flooded with photos of STR shooting with the team. 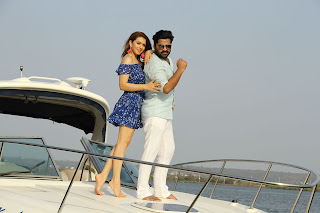 Above all, it’s producer Mathiyalagan of Etcetera Entertainment, who is pretty much excited about his experience of working with STR. He says, “We planned for a 8-day schedule and we are now on the third day of shoot , shooting continuously in Goa. It’s quite hectic as we have to shoot across 5 different locations every day. This schedule has episodes involving STR and Hansika that includes a song, action block, romantic episodes, a party, break up and patch up sequences to be shot. '

The producer is all praise for his hero STR whose co-operation has been exemplary, ' I had heard  from certain people that he would pose to be a burden to producers. But right from day one, I am relishing each and every gesture of his. For instance,  we couldn’t manage to get a proper caravan and were  doubtful if STR would create an issue. To our surprise, he just said, “Sir, this isn’t going to come onscreen, right. Let us focus on what’s going to be filmed.”


Even during long shoots, STR had no complaints and was a thorough professional. 'We had to continuously shoot from 12 p.m. to 12.30 a.m. Despite the late pack up, he came with an upbeat  attitude and asked what time he should report next for the shoot. Getting such an actor is a big boon to budding producers like us. When we were trying to bring a caravan from Mumbai to Goa, he just told us not to worry and took rest inside the Innova car until the preparations on the sets were done. Moreover, he used to voluntarily come out and check if everything is fine and his childlike curiosity of asking if the shot is okay left us awestruck. My humble request to all producers is that just come and travel with him. He isn’t asking you to be there on the sets all the time, but just understand his requirements and he’s yours. Despites the unbearable heat and terrible sweating, he is travelling all over the places for the shoot.'


Speaking about his heroine,  the producer says,  'On her part, Hansika Motwani is doing a great job and is totally cooperative. Their chemistry is working out perfectly. Director Jameel is excellent with his directorial skills and is handling every pressure and challenge with coolness and so is cinematographer Lakshman. The entire team comprising of young people are spreading positive and energetic vibes completely.”