Kasada Tabara is not an anthology -Chimbu Devan

- June 09, 2019
By Rinku Gupta
Chimbu Devan’s multi-starrer Kasada Tabara has been getting a lot of attention on social media.
The director says, “It was entirely a different and phenomenal experience to work with such a bunch of talented actors and technicians. Name anyone in this league - Harish Kalyan, Sundeep Kishen, Shanthanu Bhagyaraj, Venkat Prabhu, Premgi Amaran, Vijayalakshmi or Priya Bhavani Shankar, everyone is known for their unique performance. In addition, they are actors who haven’t been part of a rat race, but always been   searching for the right projects." 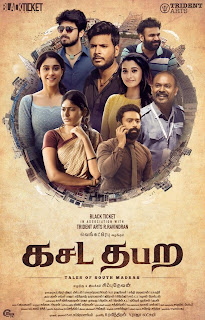 About the technical team he adds, "From the well celebrated iconic Yuvan Shankar Raja, to Santhosh Narayanan and the current sensations like Ghibran and Sam CS, it’s unimaginably a huge boon to Kasada Tabara. I am thankful to producers V. Rajalakshmi and Trident Arts R Ravindran for trusting this concept and helping to materialize it. Now to see the response for the first look and motion poster gives  us a huge confidence "

About it being termed an ' anthology' he clarifies " Our film doesn’t belong to this genre. An  anthology is a collection of short stories that has no connection between one segment and the other. In contrast, Kasada Tabara is a film with a single story encapsulating six portions.”