Hero Vijay Deverakonda has just been on an extensive promotional tour of his upcoming July 26th release Dear Comrade. The Telugu film produced by Mythri Movie Makers and directed by debutant Bharat Kamma is being releasing big (being dubbed Tamil, Malayalam and Kannada) in all 4 southern languages and has already created a huge buzz especially with the press and media  interactions and live concerts by the lead actors Deverakonda and Rashmika Mandanna. 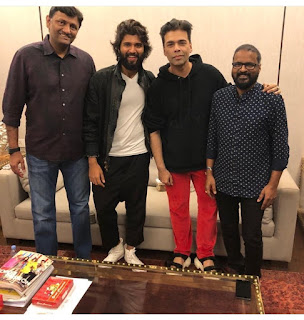 Now, the good news is that even before release, none other than Bollywood biggie Karan Johar, who has watched the film, will be doing the Hindi remake of Dear Comrade.
Both Johar and Deverakonda announced the news on thier instagram pages on Tuesday evening, creating a huge buzz around the project.

Karan Johar wrote, ' Had the pleasure to be the first to see #dearcomrade. What a powerful and intense love story!....Glad to announce that @dharmamovies will be producing the Hindi remake of #dearcomrade!! Super excited  about this!!!'

Hero Vijay Deverakonda wrote , ' So proud  to have this man, watch, love and be the one to remake or Baby #DearComrade in Hindi.' 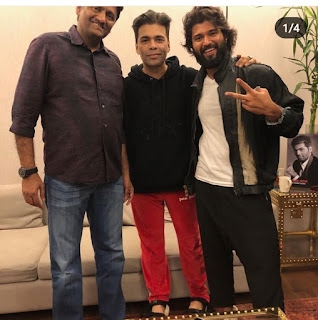 Accompanied by a group photo, Deverakonda also added,  '..Team Dear Comrade, Comrade @karanjohar ❤ biggest hugs,  love and respect for you. Cant wait to do something mad with you  and @dharmamovies' (Does this last sentence imply  that  the remake will mark the Southern hearththrob's entry into Bollywood?)

After Kabir Singh (the Hindi version of Arjun Reddy) this will be the second film of  Deverakonda's  to be remade in Hindi.

The charming, down- to- earth actor  has risen from the ranks and become a name to reckon with within a short span in Tollywood.
It maybe recalled that
Karan Johar had previously collaborated with SS Rajamouli for the Hindi release of Baahubali.
Arjun Reddy Dear Comrade Dharma Movies Kabir Singh Karan Johar Rashmika Mandanna Vijay Deverakonda