Its neither love nor arranged- Varalakshmi at Kanni Rasi press meet

Actor Vemal and Varalakshmi’s upcoming movie is Kannirasi which marks thier fresh pairing, directed by debutant S.Muthukumaran. The film is produced by Shameem Ibrahim under the banner King Movie Makers. Actor, director Pandiarajan plays an important role in this film alongside Robo Shankar, Yogibabu and others. 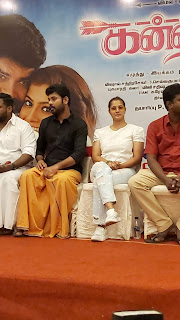 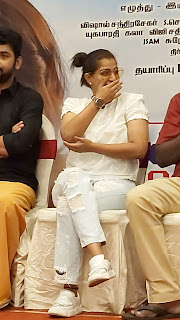 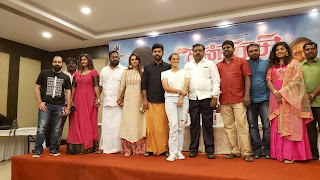 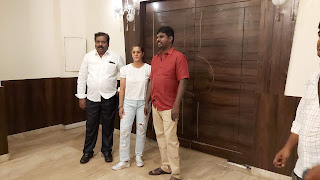 Lyricist Yugabharathi  said “I can proudly say the film Kanni Rasi is produced by a journalist instead of using the word ‘Producer’ since the producer Shameem Ibrahim had many years og working experience as a journalist before. Muthukumaran  has  encouraged love marriages via this movie".
Actor Robo Shankar praised the producer, " We all really enjoyed at the shooting spot because the producer took so much of care  by providing biryani to all of us on a weekly basis and gave us a beautiful place for shooting. Especially I thank the director because he would call us only at 11 am for shooting. Compared to other films I really should say that Varu (Varalakshmi) has now acted as a female character in this film, because we all witnessed her taking on  bold characters or as a girl with negative shades, rather than being a next door girl or being  homely and feminine looking as she is in this film! in this film which come in very rare!"
Director Muthukumaran said, "I really thank my producer for  giving me  a big support for my debut movie. Music director Vishal Chandrasekar has done a super job for this film and I also say that I would like to work with him one more time in my next film too. I also thank my editor Raja Mohammed, DOP Slevakumar and lyricist Yugabharathi for being my strengths in this film. After crossing so many struggles only Kanni Rasi is gearing up for its release. Robo Shankar anna and Yogi babu have performed well in this movie. Varalakshmi has done a great job in her role. Whatever things needed to make her role up to the mark she did it with full dedication and adjusted herself to the character even though she had some difficulties. Vimal is capable of whatever we say and he is a director artist. He is the main reason for me to be a director now. If he is not here it would not possible for me as a director to this film, he has given a bog support in my career."

Varu said,  “Usually I like working with new directors. I really laughed out  while reading the script itself. This team is so energetic to work with This film is mainly based on the concept  of love. This film gave me wonderful working experience with actors like Pandiyarajan sir, Yogi babu, Robo Shankar and others. It was fun filled experience while on the shooting spot. Vimal is the best actor and it was a new experience to work with him. She finished off her speech by adding “This is a jolly film celebrating the whole family with comedy elements filled in it.

Hero  Vemal said, “This film has came out well and is  gearing up for release. I have more of combination scenes with Yogi babu, Robo Shankar and Kaali Venkat. So it will be a fun entertainer. As for the director year he is unmarried but often seems to be around 10 girls on the sets. Hopefully I wish he gets hitched next year soon."
Answering a question whether she is prefer love or arranged marriage , Varalakshmi said laughingly, "I personally  dont think marriage is necessary  for me so the  question of choosing love or arranged  doesnt arise! You are asking the wrong person! "
Kanni Rasi Varalakshmi Varu Vemal