KJR Studios teams up with Salman Khan Films for Dabangg 3 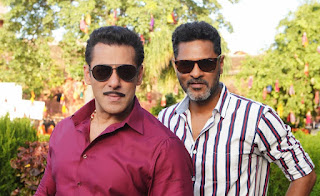 Sharing the news, producer Kotapadi J Rajesh, KJR Studios says, “I consider this as a remarkable milestone for KJR Studios and we as a team are extremely happy about it. We at KJR Studios have been focused on producing and distributing films that cater to the tastes of universal audiences. Personally, I have been a hardcore fan of the Dabangg franchise as it packages a whole lot of entertainment, fun, action, romance, family sentiments and comedy together. Moreover, the kind of response, the film has encountered in Tamil Nadu has been phenomenal and this prompted us to think about getting the movie dubbed in Tamil as well. Especially, with Prabhu Deva teaming up with Salman Khan, everyone in the trade circles were self-assured with 200% success, right from the moment of announcement.  Now, we are so much delighted, joining the Dabangg family and thank Salman Khan, Arbaaz Khan,  Aditya Chowksey, Prabhu Deva and others, who were responsible for this great association.”