Kavalthurai Ungal Nanban is a Cop vs Comman man story. The
First look of the film was already released earlier this month. The teaser will be out  tomorrow (22-Sep-2019), released by director A.R.Murugadoss on his twitter page. 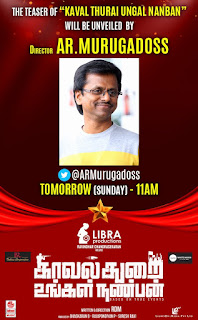