Srikanth's next is Sambavam with Dinesh master

John Max the producer of Shalom Studios, who had earlier produced for Mynaa, Saatai, Mosakutti, Sowcarpettai and Pottu is now producing an upcoming film titled "Sambavam". 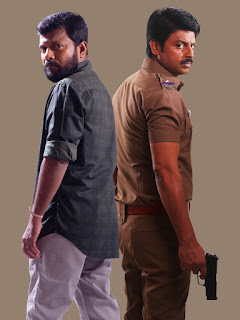 With this movie actor Srikanth and dance master Dinesh are joining together for the first time.
Actresses Poorna and Shursti Dange are playing the female leads. Alongside baby Shruthika who had earlier acted as a daughter to Vikranth in Bakrid is doing a role here too. Actors Kishore, Thambi Ramaiah,Director A.Venkatesh,Motta Rajendran and  Jaya Prakash are playing the main supporting roles.

The plot of the story revolves around how a honest person who lives according to what his inner heart says gets caught in a critical situation which happens to be exact opposite to his character and how he faces the situation and solves the problem is the base story.

The film is directed by Ranjith Parijadham who had earlier worked as an assistant to A.Venkatesh. Story, Screenplay and direction is done by Ranjith himself for this movie. The music is scored by Amrish, while cinematography is done by Muthu K Kumran and Editing is done by Gopi Krishna respectively. The dialogues are written by Neelan K Sekar. Arun Bharathi and Muruganantham have penned the lyrics for this movie. A. Palanivel handles the art department and choreography is done by Dinesh master himself. Vijay Jaguar does stunts for the film. Production overview is handled by G.Sankar and Administration Department is done by K.R.G Kannan. The film is co -prodcued by dr R.Murugananth.