Arun Vijay gets angry for Sinam !


The hunk of K-Town, Arun Vijay has finally got a title for his next film, currently under production.  An action-thriller cop movie , it is titled ‘Sinam’.

Helmed by National award winning filmmaker GNR Kumaravelan, the film  features Arun Vijay in a cop avatar for the second time after big hit ‘Kuttram 23’. However, the actor clarifies that the premise of ‘Sinam’ is completely different from ‘Kuttram 23’ . 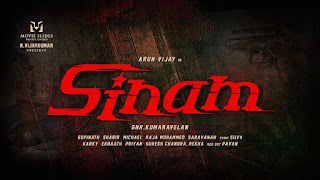 Seaking about the significance of the  title 'Sinam’ with the film’ theme, Arun Vijay says, “Be it holy scriptures or any management lessons, anger is always labeled a negative. In fact, we often come across ‘Anger Management’ classes as well. But, what ‘Sinam’ conveys is that sometimes, ‘Anger’ is good and it can even bring justice for the needy. So that happens to be the motive of the protagonist in this film.”

Sharing his working experience with GNR Kumaravelan he says ,"He owns an expertise in planning and executing things perfectly. We had a smooth first schedule and will be kick-starting the second schedule from November 8.”