Nayanthara's next is Mookuthi Amman !

Post the hit Bigil, Lady Superstar Nayanthara's next film is to be directed by popular host and RJ turned actor,  RJ Balaji. The film is co- directed by NJ Saravananan.
The project is bank rolled by Vels Film International's Isharai K Ganesh , who also produced the RJ Bajaji hit film LKG. The film is titled Mookuthi Amman and is slated to be a summer 2020 release. 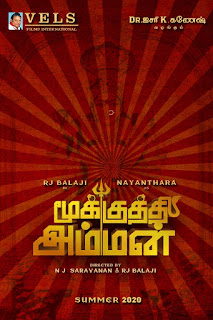 Nayan is known for choosing her scripts with care and the buzz is big around this project to be helmed by RJ Balaji who is known for his quirky humor and bent for social causes.  Let's see what this new project will be all about!
Bigil. Nayanthara Ishari K Ganesh rj balaji vels