- November 01, 2019
By Rinku Gupta
The ace production house AVM is well respected across the industry. The fourth generation of the family, the twin grand-daughters of M Saravanan had  also entered into production a few years ago.

Now Aryan Shyam, the son-in-law of M Saravanan's son, producer S Guhan, has also entered the industry as an actor. 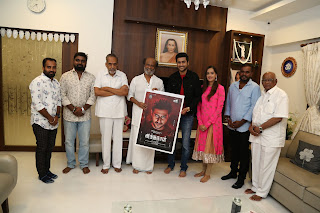 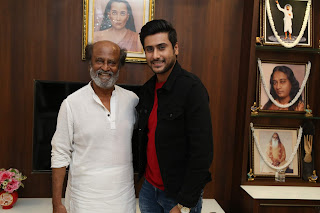 M. Saravanan, SP. Muthuraman and Aparna Guhan ( wife of Arvind Shyam and daughter of S Guhan)  of AVM Productions, hero Aryan Shyam, the director of the movie Vivy and cinematographer Sathish Kathiravel were present on the occasion. The movie is being produced by Mr. R. Raghunandan for Green Magic Entertainment and will be released shortly.

It may be recalled that Andha Naal is also the name of the  crime drama that starred Sivaji Ganesan and was produced by AVM  in 1954. It had no songs and dance.
Andha naal avm Rajinikanth