Sanjay Dutt as Adheera in KGF 2, First look out !

- July 29, 2020
by Rinku Gupta
The first look of the villain in the  much awaited Yash's  KGF's sequel is out.
KGF Chapter 2 has Bollywood star Sanjay Dutt playing the dreaded villain Adheera. The makers Hombale Films have released Adheera's first look poster today on Dutt's birthday. 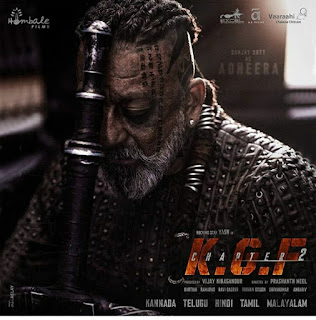 Dutt shared the poster on his social media pages, writing, "Its been a pleasure working on this film and I couldn't have asked for a better birthday gift. Thank you @prashanthneel, @karthik.krg, @thenameisyash, @vkiragandur, #Deepak, #Lithika, #Pradeep & the entire team of KGF. Special thanks to all my fans who have
always showered me with their love and support!
#KGFChapter2 #AdheeraFirstLook "
Directed by Prashant Neel the film will release in Kannada, Tamil, Malayalam, Telugu and Hindi.
Prashant tweeted, " ‘ADHEERA’ - Inspired by the brutal ways of the vikings⚔🔥
Happy Birthday @duttsanjay baba, thank you for being a part of #KGFCHAPTER2. Looking forward to our craziest schedule soon.
#AdheeraFirstLook..."
adheera Birthday hombale films KGF kgf chapter 2 kgf chapter2 sanjay dutt Yash