Jayam Ravi has unveiled the first look of Boomika, which is the 25th film of actor Aishwarya Rajesh. The powerhouse performer recently recieved kudos for her act in Ka Pae Ranasingam. 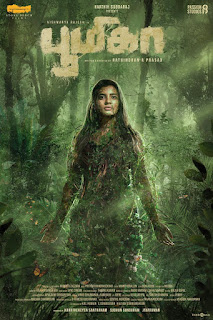 Director Rathindran R Prasad reveals, “Boomika will be an intense thriller laced with surprising twists. Personally, I am very much happy to see the spellbinding performance of Aishwarya Rajesh, who has been enthusiastically involved in the project, right from the beginning."

The film was shot in the Nilgiris. He adds, "The actor overcame gruelling shoot days and many adverse climatic situations while shooting the movie across Nilgiris, but her focus on defining perfection in every shot has added immensely to the final outcome. I am confident that audiences  will definitely appreciate her proficiency and dedication. Stone Bench Films has become an emblem of churning out commendable films. To get an opportunity to be a part of a project produced by them is exciting."

Director Rathindran R Prasad became the cynosure of industry with positive word of mouth spreading about his efficiency as a director with yet-to-release “Idhu Vedhalam Sollum Kathai’.

Boomika's cast includes Paval Navageethan, besides  a bunch of newcomers in the film, who have exhibited their best in their respective roles.

Kaarthekeyen Santhanam, Sudhan Sundaram and Jayaraman are producing Boomika for Stone Bench Productions and Passion Studios, and Karthik Subbaraj is presenting it.