Vijay Antony has  Kodiyil Oruvan and Khaki in the pipeline, both backed by Infiniti Film Ventures. Now the production house and actor collaborate for a new project, an edge-of-thriller directed by ‘Thamizh Padam' franchise fame CS Amudhan. 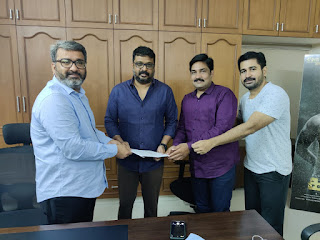 Actor Vijay Antony says, “When director CS Amudhan narrated the script, I was completely astonished to see him shifting the paradigms from  spoof-based movies to a thriller zone. "

Director CS Amudhan says, "Having made movies based on humor, I am stepping into the thriller genre for the first time. I thank my producers and Vijay Antony for banking their confidence in me. We are now at the pre-production phase and will be soon finalizing and announcing the title alongside the cast and crew.”

Kamal Bohra of Infiniti Film Ventures is confident about his project, “Vijay Antony has become a bankable star in the box office. Infiniti Film Ventures is happy to be associated with him for the third time. CS Amudhan is known for his engrossing storytelling and  hilarious entertainers. This time, he will enthrall them with a different dimension, which is an edge-of-seat thriller. Currently, the film is in the pre-production phase."