The rural drama is a sibling story about Mathangi ( Jyoktika) and her brother Vairavan ( Sasikumar). The brother-sister duo's  love for each other is  legendary in the village.  But when Mathangi's husband Sargunam ( Samuthirakani) falls out with her brother, blaming him for a tragedy that befalls their family,  the siblings can no longer talk  to each other even after a 15 year gap. 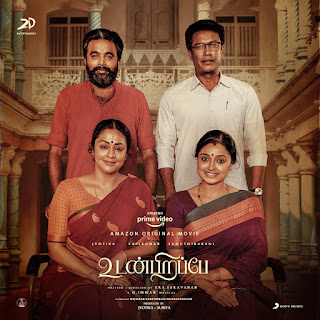 But a series of events unfold, bringing matters to a head. Will the siblings unite again?

Jyotika gets an impressive introduction scene in this heroine- centric film, which brings to the fore her histronic  talents yet again, this time playing a more subdued, dignified  character who talks more with her eyes and expressions. She gets some very impactful dialogues in the beginning scenes  with other characters taking over later.  Sasikumar makes for an apt choice as her brother.

Samuthirakani plays the righteous teacher, slipping easily into a tailor made role, though at places his character turns cariacaturish. Soori as the comic element wins you over, especially in the humorous scenes laced with emotion, creating an impact.

The family drama with a large star cast seems lavish in its making, with good visuals of the village backdrop and large crowds of villagers in most parts, extolling the virtues of the leads to commenting on their lives. Stunts are kept minimal in this family entertainer.  Kalayarasan, Naren, Nivedhita Sathish, Sija Rose  are also part of the cast, making a mark with their performances.

The movie comments on several social issues  without sounding preachy. However,  the melodrama could have been cut down a few notches. Watch out for the twist of sorts in the climax.

Jyotika, who superbly enacts the turmoil of  woman helplessly torn between the  conflict between brother and husband, is the mainstay of the film in a role quite differently played from her usual ones so far.