Ever since the announcement on Sunny Leone’s debut movie in Tamil industry titled ‘Oh My Ghost’ was made, there has been more curiosity mounting upon the project. Although, the first leg of shoot was completed a few days ago, the crew was looking excited to have the gorgeous Sunny Leone join the sets. Apparently, the second leg of shoot that commenced in Mumbai has been successfully completed in a shorter period, with the entire cast and crew strictly following the COVID protocol and norms. This schedule involved the major portions involving Sunny Leone being shot. 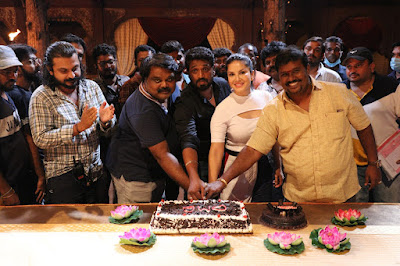 Director R.Yuvan says Omg means "oh my ghost"   this is completely fun and entertainment movie.this film story based on periodic type first time we planned horror comedy in periodic background.sunny Leon character playing major attractions in this film which is fresh and lead role in this film.

Oh My Ghost is produced by D. Veera Sakthi and K. Sasikumar of VAU Media Entertainment and White Horse Studios. Sindhanai Sei movie fame R. Yuvan has written and directed this movie.Sunny Leone is playing the lead character alongside Satish, Yogi Babu and Darsha Gupta are the others in importan roles. The other actors are Mottai Rajendran,Ravi Maria, Ramesh Thilak, Arjunan, Thanga Durai, and many more. Javed Riaz is the music director, and Deepak D. Menon is the cinematographer.