Ulaganayagan Kamal Haasan is ecstatic after the blockbuster success of his film Vikram, directed by Lokesh Kanakaraj. 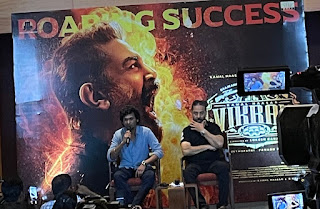 The duo held a success meet, engaging with the the press and media and sharing their happiness at the success of the film which also stars Fahad Faasil and Vijay Sethupathi.

"We are here to share our joy and thank you all.  We will continue to keep on  efforts to do good work," said Kamal. 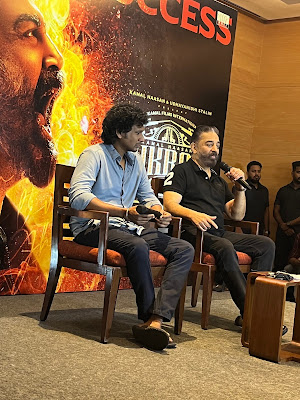 Fielding questions on topics  like the possibility of the revival of his pet projects, long ago put on the back burner, Marudhanayagam, Maramyogi and  Sabash Naidu, Kamal was in his element as he answered questions with candour and flair. He responded by saying that with the passage of time,  having lived with the stories, his interest has diminished and he now was more interested in exploring newer subjects. But he also expressed regret that he could not showcase many skills to viewers, which felt like a loss to him,  because those films didn't take off.

From questions about the lack of his  trademark lip lock in the film, to working with Suriya aka Rolex in a possible Vikram 3, Kamal jovially answered all questions. He also revealed the possibility of working with Vijay in the future if the right project came along.

On the question of working with Rajinikanth on screen with Lokesh directing he said, " This question should be put to each of them individually to see if they are ok with it. I am always ready."