The Rajeswar Kalisamy directorial Ammuchi 2 with acting by  the Nakkalites team ( Arunkumar, Sassi and others), dropped on Aha Tamil on June 17th.

This sequel to the original, deals with the life of an aspiring student (Mithra) who wants to study further, against all opposition from the drinken patriarch of the family.  When she informs Arun about this,  he comes to Kondangipalayam, the village of his ammuchi (Chinnamani amma in a superb performance) with the sole mission of helping her achieve her goal.  In the process, he also lies to his family,  saying that he is going to Goa. What are the roadblocks he meets with in his plans? Do the youngsters succeed? 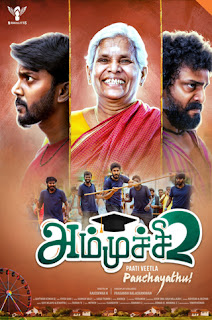 The local flavours and landscape are well captured by DOP Santhosh Kumar, making it one of the highlights of the series. The delightfully endearing scenes between the ammuchi and the youngsters she dotes on are a mix of fun and emotions. Overall there are ample doses of jolly moments and a mix of sentiments in the episodes to keep both the youth and family audiences engaged. Screen play and dialogues by Prasanna are a plus.  Music by Vivek Saro is suitable to the mood of the series.

Some scenes, with editing by Kannan Balu, could have been clipped to make for crisper viewing. The sequel retains the flavour of the original on You Tube, but perhaps the production  could have been a tad enhanced for the current OTT platform.

Overall, Ammuchi 2 makes for an entertaining watch for youngsters and families.