Producer Boney Kapoor presents ‘Nenjuku Needhi’, produced by ZEE Studios & Bayview Projects in association with Romeo Pictures and directed by Arunraja Kamaraj features Udhayanidhi Stalin in the lead role. The movie, which centers on a serious social issue, has found immense response from audiences and critics, thereby facilitating a successful theatrical run of 50 days with blockbuster collection. Marking this great occasion, the cast and crew of this movie hosted the success meet and interacted with press-media fraternity.
During the commencement of this event, producer Boney Kapoor shared a thanksgiving note, gifted 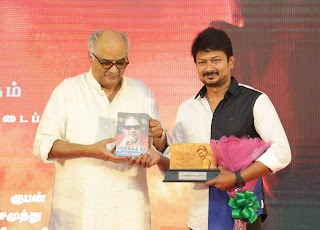 Producer Boney Kapoor said, “We feel happy to have presented this movie for you all. It’s been a great experience working with the entire crew of Nenjuku Needhi. We at Bayview Projects are keen focusing and materializing the content-driven movies. I am eager and curious to produce many Tamil movies, and are currently involved in the production of more projects. We will continue to deliver many good movies. We will be collaborating with Udhayanidhi Stalin for yet another project. It gives me immense pleasure to be working with the biggest names in the Tamil movie industry.” 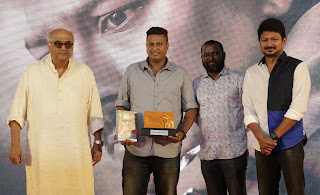 Director Arunraja Kamaraj said, “As a team, we are happy that the movie has turned to be an enlightening one for many individuals. This is my second movie as a director, and it’s great to see that it has completed 50 days of successful theatrical run. We are happy to get such an intense and appealing title for this movie. I thank each and everyone, who journeyed alongside me for this project. I thank the technicians, who shaped the movie to a greater degree, and actors who gave soul to the characters. We are so happy for having created a movie that has social values.”

Actor Aari said, “I got a proper recognition in my career through Udhayanidhi Stalin. The success of Nedunchalai was possible only because of Red Giant Movies. I am so elated to be sharing the screen and stage with him in an honest movie with organic success of 50 days. I thank everyone in the team. I consider this opportunity as the greatest gift. I thank producer, director and Udhayanidhi for this lovely opportunity.”

Actor Udhayanidhi Stalin said, “Both myself and Arunraja are teaming up again for yet another movie. It was an amazing experience working with Arunraja Kamaraj. Initially, it was difficult to work in this film, later Arun exerted immense effort into this flick, which became the sole reason for the success. Both the actors and technicians have given their heart and soul in this project, which escalated the graph of success. I thank everyone who supported this movie. I request everyone to support the good movies as always.”
boney kapoor nenjuku needhi