Ram Pothineni dubs in Tamil for The Warriorr

Ram Pothineni has been dubbing his lines for the Tamil-language version of his upcoming Telugu-Tamil bilingual, The Warriorr. The energetic actor is well versed in Tamil and he completed dubbing recently for his role in both Telugu and Tamil versions of the action thriller which is directed by N Lingusamy. The Warriorr is currently in the promotions phase and it is releasing worldwide on July 14. 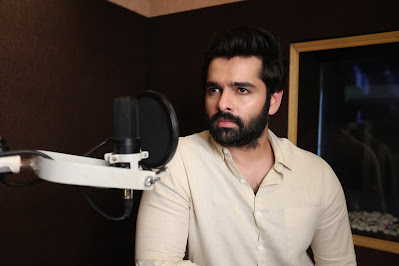 The Ram Pothineni dubbing promo was released today, with the actor seen reciting a powerful dialogue. "Ram is proficient in Tamil." The goal of Ram dubbing in Tamil is to reach out to the native audience.The makers hope that Ram's extra efforts for the Tamil version will spark the interest of the Tamil audience. The Warriorr crew was also surprised by Ram's interaction with the locals in Tamil while filming in Chennai. The actor is also claimed to be ecstatic about dubbing his lines in Tamil, which he has never done before.The Warriorr is simultaneously shot in Telugu and Tamil. The film has Ram Pothineni, Krithi Shetty, and Aadhi Pinisetty, and others in important roles. The film is directed by N Lingusamy and produced by Srinivasaa Chitturi. Pavan Kumar presenting the movie
ram pothineni