Watchman is a summer special for kids and families 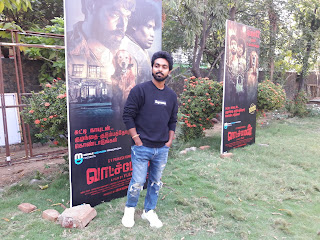 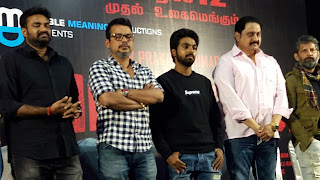 The film has a dog as one of the main protagonists and is directed by Vijay. Sayyeshaa has done a promo song with GV Prakash and Yogi Babu which was screened at the press meet.  The camera is handled by Nirav Shah. The film is touted to be a summer special which would be attractive for children.  Raj Arjun from Bollywood has acted in the film. He is the father of baby Sara who has been a part of many Vijay films.

Actor Suman who is part of the film was very happy to act in Tamil again. 'I always want to be a part of Tamil films even though I live in Hyderabad now.  GV Prakash I knew as a music director  and I was thrilled to work with him. Vijay has  directed the film so effortlessly. The film is very interesting and different. Its a film which requires guts to make. Nirav Shah's lighting is like Hollywood film. Anthony has done very sharp editing.' He announced that he has a big land near Hyderabad which he is going to donate to war veterans of the Kargil  war. 'The armed forces are  the real watchmen of our country living in very tough conditions.  We should learn from them how they live in tough conditions and serve the nation without any barriers of caste, creed or religion.'

Director  Vijay said,' The producer is very passionate about cinema. All the technicians have contributed thier best. Editor Anthony has also acted in the film. Cameraman Saravanan has also worked on this project with Nirav. Suman sir' s personality was best suited for this film. And I was grateful he accepted. His presence made a big difference to the film. GV and I close friends and habe worked together. His rise has made me very happy. I wanted to always work with him. He was very shy earlier but I was amazed to see the change with Naachiyar. He has grown so much as an actor. In  this film his reactions are most important and he was able to carry it off so well. '


G V Prakash, who is well known for his philanthrophic activities, thanked Suman for his announcement and added that he too would be happy to donate to he cause of supporting veterans of the armed forces in whatever capacity he could.
Watchman watchman