Adithya Varma Thanks Giving meet gets Vikram and Dhruv emotional!

- November 25, 2019
Director Gireesaaya's Adithya Varma, which marks the debut of actor Vikram's son, Dhruv Vikram, as a hero in Tamil cinema, has received a  heartwarming and tremendous response from audiences.
The film, which released on November 22, took a grand opening and is running to full houses.

Dhruv Vikram's performance in the film has not only won the hearts of audiences but also that of the critics. His performance has come in for praise from various quarters.
In a bid to express their gratitude to both fans and the media for their support to the film, the team of Adithya Varma organised a press conference at a prominent star hotel in the city on Sunday.
Participating in the meet and greet event, cinematographer-cum-actor Dhanush, who played one of Dhruv's friends in the film, said, "When I saw this film in Telugu, I was so impressed by it. I too wanted to work in an emotional film like this. When I got an opportunity to work in this film, I was excited. I am a cinematographer. But suddenly Vikram sir one day said, "You do this role. On my first day, I couldn't even walk straight. But then, slowly, I began to learn and do well." 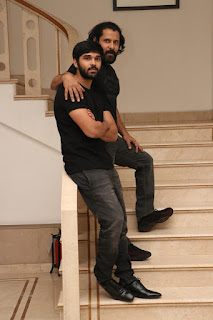 
Distributor Shakthivel of Shakthi Film Factory, said,"The waiting time for Adithya Varma was long. I loved Arjun Reddy. That was how, I got into Adithya Varma. After this film, we now have Dhruv, a hero who is in his 20s and who can be cast in a big budget film. Producer Mukesh sir enjoyed making this movie. Very happy to have been a part of this film."
adithya varma chiyaan Vikram dhruv vikram