On the momentous day that Superstar Rajinikanth recieved the prestigious Dadasaheb Phalke Award in New Delhi yesterday, his daughter Soundarya Rajinikanth launched  her pet project, Hoote, a voice based social media App, amidst a gathering of press and media in Chennai.

" Hoote is from India for the world.  It will focus on voice messaging. Everyone deserves to be heard and people across the board, from the common man to celebrities in various fields can use Hoote in multiple languages," said Soundarya. 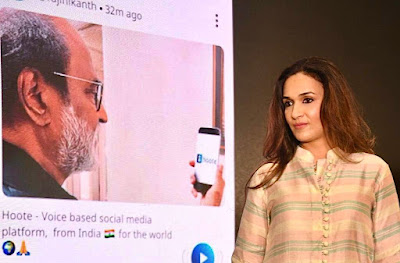 The user can record his or her voice for 60 seconds and also post media along with the Hoote message.

Soundarya explained how it was an easy to use interface, the idea of which came to her when she recieved a voice note on what's app from her father one day, "He was in Hyderabad shooting for Annathhe. We were discussing something which had to be tweeted. Appa sent me a voice note instead of typing. Hearing my father's message  I realised that his voice, carried so many emotions with it.  That's how the idea of Hoote was born in that  split second. My father was the inspiration behind it." 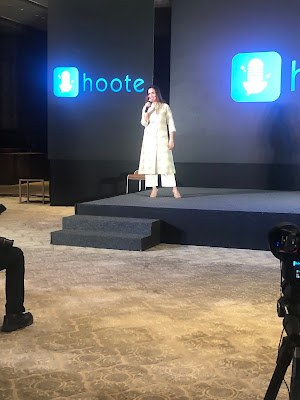 Soundarya and her team have worked for several months on the concept. At the Hoote launch, a Hoote from Rajinikanth was played on screen, launching the App and wishing the team.

The app already has several celebs from various fields on it. Wishes have been pouring in on social media for the unique India- based App. We wish the team all the best!